The 2022 NFL season is heating up as Week 3 of the 2022 NFL schedule is in the books. While it felt like just yesterday the NFL Draft 2022 was taking place, now many of those top tier rookies as well as the elite talent around the league are looking to lead their teams to the post season. As you start to look at the first three weeks of the NFL Schedule2022, the time is now to take a look at 10 NFL Players Cards to Invest in Right Now September 2022.

Investing in football cards can be fun but also difficult depending on what you are attempting to accomplish. Read our Hot 2022 Football Rookie Cards to Collect right now for a few ideas of the top NFL rookie cards 2022. In addition to you could also consider researching the top NFL rookie cards 2021 available. Read on to learn more about which NFL cards to invest in right now after Week 3 of the NFL season.

Factors impacting what NFL Players Cards to Invest In

Before you hop onto your eBay app and start buying football cards based on the latest headline saying sports cards are booming, consider taking time to learn how to properly invest in sports cards including investing in football cards.

One of the biggest factors when it comes to sports cards is whether or not the card is a players rookie card or just a regular card from another season. Rookie cards hold higher values and resale prices.

Base Card or Insert Card – NFL Players Cards to Invest In

A second factor to consider is whether or not the cards you are looking to invest in are just base cards or are they an insert or short print. While some base cards have value such as the Mike Trout Topps Update rookie card, not all base cards will see the value as others. However, insert cards such as a short-print (SP) or super short-print (SSP) can come out of the pack reselling for a couple hundred dollars. Meanwhile some inserts such as the Panini Kaboom! Or Panini Downtown inserts graded can fetch thousands of dollars.

Since rarity of the card has a major impact on value, numbered sports cards have the advantage over non-numbered sports cards. For example, a Bowman red refractor is numbered out of 5, meaning there are only five of that card for that single player. Unfortunately, not all cards are numbered but that isn’t a bad thing SP’s, SSP’s, and even some inserts such as the ones have lower print runs.

Another attribute that you will find on football cards as well as sports cards in general are some cards will be autographed by the player while others aren’t. Autograph cards especially rookie autograph cards and Rookie Patch Autos or RPA are always in high demand. Especially RPA from high end products such as Topps Five Star and Panini National Treasures.

When it comes to adding a ton of value graded cards that receive high grades such as 9.5 or 10’s from companies such as BGS and PSA can skyrocket based on the Pop Reports for those cards with those third-party grading companies. Take the time to research the cards, learn how to inspect them, and decide whether or not you should have the card graded. Graded cards with high values are a better investment than a non-graded card. However, if you learn how to inspect cards, and send for grading you can make more profits from ungraded cards.

Performance of the NFL Player – NFL Players Cards to Invest In

In addition how the player is performing at the time of purchasing their cards has a huge impact on the value of their cards. A player struggling or has missed time due to an injury could see a dip in their card prices whereas a player who is red hot or is on the verge on winning a major award such as the MVP award will see a rise in their value.

With sports card flipping, the trends that follow that player play a key role in the value of his cards. The same is said with the NFL when a player gets hot such as a quarterback who has struggled or a rookie finally starts to play as expected. While investing in these cards are also a solid idea, someone looking to make a fast profit can use trends to help increase their profits. Other factors such as important games, National Spotlight games, as well as the NFL Playoffs and Super Bowl can impact the card values.

Price of NFL Card – NFL Players Cards to Invest In

Lastly depending on if you are looking to invest in that card for the long haul or just for the short haul, the price of the card is a major factor in deciding whether or not to purchase that card. For example, years back if you had the opportunity to invest in LeBron James rookie autographs from Upper Deck, they may have been very pricey, however some of those same cards are fetching six figures.

Now remember investing in cards is no guarantee as the market could crash or that player could suffer a serious injury that derails their career. If you are looking at it from a flipping perspective a card that has interest but are lower value will have less risk for the sports card collector.

Let’s get this party started and take a look at 10 NFL Players Cards to Invest in Right Now. Based on the start of the NFL Schedule2022 and potential moving forward.

After a disappointing first season the former number one overall pick is playing at a high level in 2022 showing his potential through three games. Entering week 4, Lawrence ranks 13th in the NFL in passing yards, tied for 8th in touchdowns and has the second fewest number of interceptions thrown. 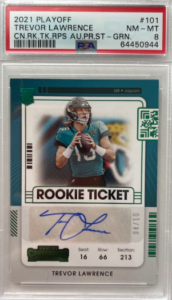 Quarterbacks are always in high demand and the rookie quarterback for the Tennessee Titans should be on everyone’s investment list. With the Titans struggles early, following out of contention at any point of this season could lead the team to shift to the rookie to prepare him for an opportunity to take over starting duties during the 2023 NFL season.

The second-year star from the Alabama Crimson Tide is living up to high expectations through his first two seasons. While ranking 2nd in the NFL with 342 receiving yards through the first three games, Waddle is often looked past in the wide receiver group behind guys such as Justin Jefferson, Tyreek Hill, and Jamar Chase. While receiver cards don’t fetch the high price tags as quarterbacks, low numbered inserts and Rookie Patch Autographs should continue to bring value. 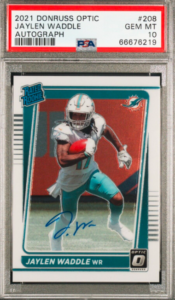 Can the time be coming for the future to begin in Pittsburgh Steelers? After struggles to start the season and lack of awesome, the Steelers could be looking to move in the direction of their rookie signal caller sooner rather than later. If this happens, Kenny Pickett rookie cards could see a huge spike in value especially if he comes in and plays well down the stretch. 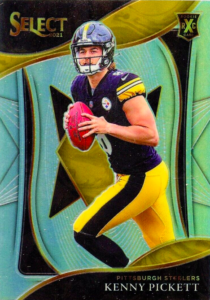 The former number two overall pick during the 2022 NFL draft is another interesting prospect and a player that has a huge high. However defensive cards are often rare based on the number of products they are inserted in making Aidan Hutchinson rookie cards limited compared to say Malik Willis or Kenny Pickett. 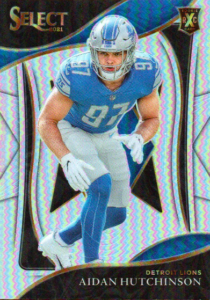 Despite seeing high values, Lamar Jackson cards could continue to go up based on how he has played this season. Through three games he has put up the numbers warranting his second NFL MVP. If Jackson wins his second MVP during the 2022 NFL schedule, look for his cards to increase in value while low numbered rookie cards and RPAs could double or triple in value. Jackson’s cards will be a higher price tag to start so he might not be worth it for everyone. 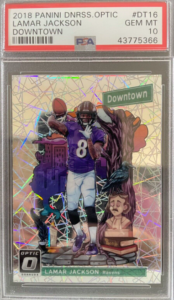 As the Philadelphia Eagles continue to be one of the hottest teams in the NFL, a potential playoff race is in front of them. The former Alabama Crimson Tide wide receiver is playing into his potential while ranking 11th in total yards in the NFL through the first three games of the season. 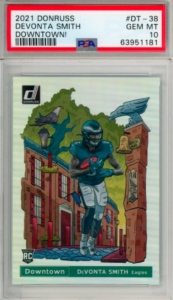 Another rookie joining the list of the 10 NFL Players Cards to Invest in Right Now September 2022 is the New Orleans Saints Chris Olave. Olave who the team drafted number 11 overall during the 2022 NFL Draft is starting his career of with solid production through the first three games. If the Saints offense can figure it out and his touchdown numbers increase so will his card values. 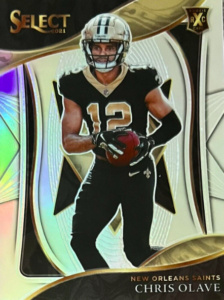 Another quarterback helping his value through the first three games is Jalen Hurts who has also played at an NFL MVP level to start the season. The dual threat quarterback has the talent to lead the Eagles on a deep run and potential Super Bowl title. 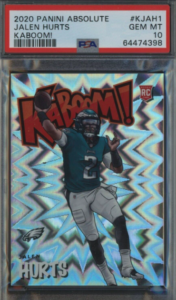 As far as a potential high risk high reward type of sports card investment, Sam Howell of the Washington Commanders may fit that bill. As the Commanders have struggled to start the season and Carson Wentz has not played well, the team could be out of the playoff picture by the halfway point making a quarterback switch a possibility.

One of the lower ends of the NFL sports card product line for the upcoming 2022 NFL season and the 2022 NFL Draft Pick rookie cards. 2022 Panini Score is a solid low end product delivering four autographs per box (hobby), 90 rookie cards on average, and 10 parallel cards. 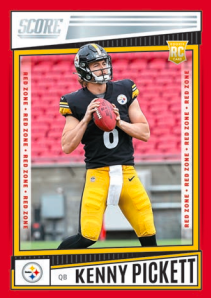 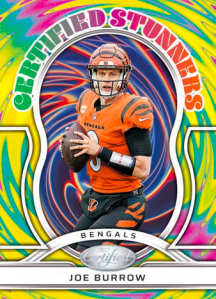