The 2022 MLB schedule is dwindling down to the final week of the MLB season with teams fighting for an opportunity to appear in the post season. With the 2022 MLB Playoffs just around the corner, the perfect opportunity for sports card investors looking to flip sports cards for money has arrived. As the sports card industry has seen over the past few seasons the playoffs within the major sports have driven the price of individual sports cards higher. Here is a look at 10 MLB Baseball Players Cards to Invest in leading into the playoffs.

Before we take a look at the ten players on the MLB Playoff Preview: 10 MLB Players Cards to Invest in list, take the time to look at the Hottest Sports Cards Right now as well as the Hottest Panini Kaboom! Inserts for additional cards to invest in. When it comes to looking at specific cards to invest in before the playoffs start, you must decide whether you are looking to spend high dollar on top tier stars, or less money or cards that are not as proven.

Read on to learn more about the 10 MLB Players Cards to Invest in Playoff Preview and whether or not you can make money flipping sports cards during the MLB Playoffs.

Playoff Preview: 10 MLB Players Cards to Invest in and Flip during 2022 MLB Playoffs

Can you make money flipping sports cards during the 2022 MLB Playoffs?

However, it comes down to when you purchase the cards of the right player, any bargains or deals you might have found, and whether or not the card is graded. In addition, young stars who have yet to make their mark, can also see a significant increase with accolades collected during the post season such as ALCS or NLCS MVP. Remember on the flip side a bad post season may drive the value down on any sports cards. Do you research as there are no guarantees any sports card will increase in value.

All eyes will continue to be on the potential AL MVP after his monster 2021 MLB regular season performance. While Aaron Judge lands on the 10 MLB Players cards to Invest in list, he won’t be the right investment/flip opportunity for everyone based on his already high dollar value attached to his most popular cards and with any of the valuable Aaron Judge rookie cards.

That said, individuals who have deep spending pockets, have the potential to make money with Judge during the MLB playoffs. If Judge wins the AL MVP as well as another award such as the ALCS or World Series MVP, additional interest could drive his card value up. Here are a few Aaron Judge cards to invest in right now before the playoffs. 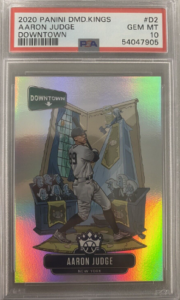 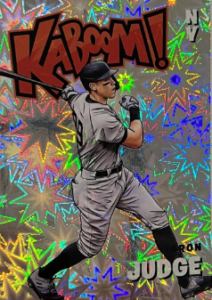 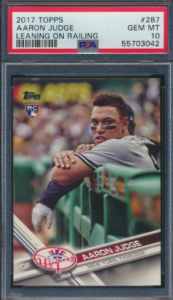 One player who continues to solidify himself as an every day player is the 21-year-old Atlanta Braves outfielder Michael Harris II. Harris II who is in strong consideration for the 2022 NL Rookie of the Year award did not make his Major League debut till May 28th, 2022, ranks near the top in every offensive category among MLB rookies. Through September 26th, 2022, Harris is batting .305 with 19 home runs and 62 runs batted in.  Here are a few Michael Harris II cards to invest in right now. 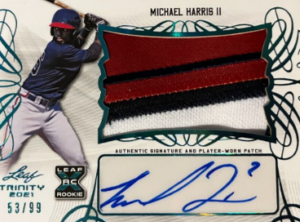 The second year Cleveland Guardians outfielder Andres Gimenez is another interesting young player to consider investing in both short term as well as long term. The Guardians who secured the AL Central division will be heading to the post season allowing a few of their young stars a chance to shine on the big stage. Gimenez is batting .303 on the year with 17 home runs and 68 runs batted in for the first place Guardians.  Here are a few Andres Gimenez cards to invest in right now. 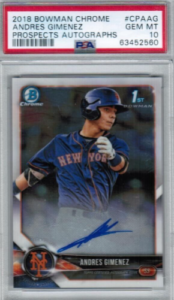 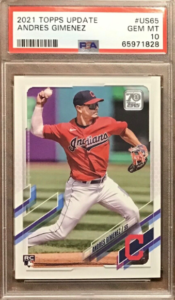 As you look at the Atlanta Braves roster, they are loaded with young talent to include Austin Riley who is just 25 years old, as well other stars such as Michael Harris II, Ronald Acuna Jr, and Dansby Swanson. Riley currently ranks 4th in baseball with 37 home runs, 17th in runs batted in with 92, and 9th in OPS. With the Braves heading back to the post season with a chance to repeat as World Series Champions, Riley, and the rest of the young core of Braves will have a chance to increase their card values. Here are a few Austin Riley cards to invest in right now. 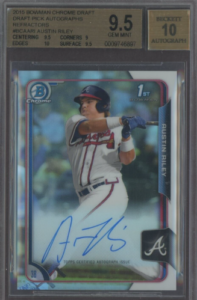 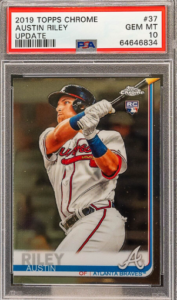 Over the next few days, the fate of the Tampa Bay Rays will be determined and there is real optimism the team could be headed back to the post season as a wild card team. If so, Wander Franco is a young star to consider investing in with a chance to flip after battling injuries during most of the 2022 MLB schedule. While Franco has the potential and talent to be the next budding star, a chance to flip his sports cards for a profit with a hot post season is high. Here are a few Wander Franco cards to invest in right now. 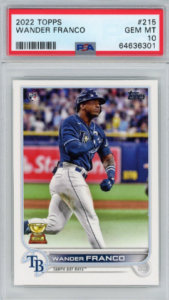 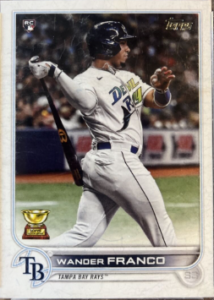 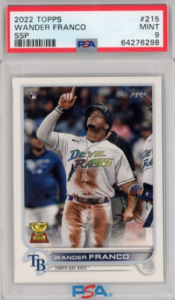 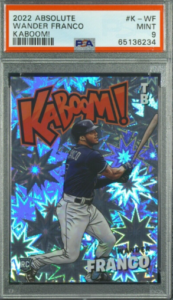 The Seattle Mariners rookie and potential AL Rookie of the Year Julio Rodriguez can land all the way up to number one on this list. However, with the Seattle Mariners holding a slight lead in the AL Wildcard standings he could be a dangerous investment at this time especially with his current status on the injured list due to a back injury. If he struggles or reinjuries his back, he could see his cards hold value till next season. Rodriguez is expected to return on October 3rd, allowing him a chance to play in the postseason if the Mariners make it. Here are a few Julio Rodriguez cards to invest in right now. 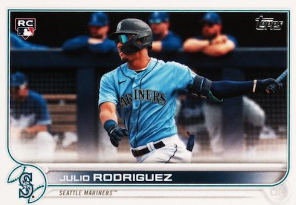 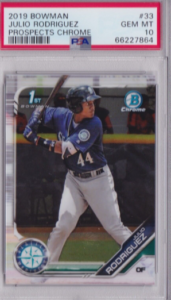 While his production has not been up to what was expected, Gavin Lux of the Los Angeles Dodgers is a highly touted prospect who is just 24 years old. With the Dodgers returning to the post season, a strong playoff run and performance from Lux could see his cards increase in value over the next couple weeks. Here are a few Gavin Lux cards to invest in right now. 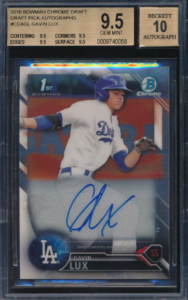 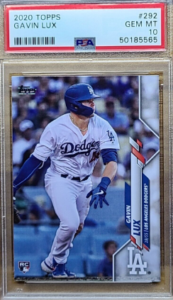 Another interesting name to consider investing in is the 24-year-old Cleveland Guardians outfielder Oscar Gonzalez. Gonzalez who much like his teammates Andres Gimenez and Steven Kwan have put together strong seasons during the 2022 MLB season. Gonzalez who missed the entire month of July has posted strong numbers in his opportunities this season while hitting 11 home runs and driving in 42 runs in just 82 games this season.  With the Guardians heading to the playoffs, Gonzalez will have a chance to increase his card values. Here are a few Oscar Gonzalez cards to invest in right now. 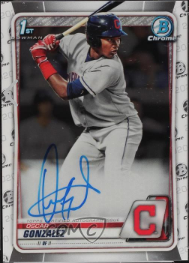 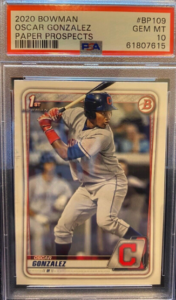 As all eyes have been on the talented Rookie of the Year candidate and Cal Raleigh teammate Julio Rodriguez, many have not noticed the strong season the Seattle Mariners catch has had. Raleigh has been a staple for the Mariners behind the plate while hitting 25 home runs to go along with 60 runs batted in. Here are a few Cal Raleigh cards to invest in right now. 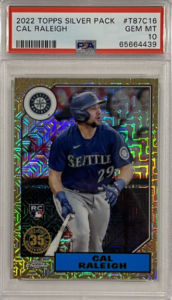 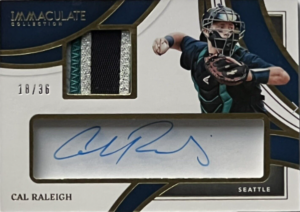 The last MLB player cards to invest in right now is Bo Bichette of the Toronto Blue Jays. The 24-year-old shortstop is putting together another strong season is 2022 while topping the 20-home run mark and 30 double mark for the second straight season. A late season push for Bichette could see him reach 45 doubles, 25 home runs and 100 mark. With the Blue Jays on the verge of making the playoffs, Bichette can increase his card values with a strong performance. Here are a few Bo Bichette cards to invest in right now. 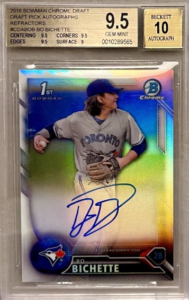 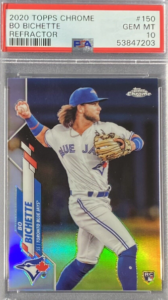