The money continues to be there for sports cards as the sports card hobby is still booming day in and day out. This includes the last week of August 2022, as a new leader has taking over as the Most Expensive Sports Card of All-Time. That card taking center stage is the 1952 Topps Mickey Mantle PSA 9.5 that recently sold for an astonishing $12.6 million dollars. However, while the record belongs to Mantle, many of these Hottest Sports Cards Right Now are seeing top sale prices as well.

Headlining the group of the Hottest Sports Cards Right Now August 2022, is the future Hall of Famer Albert Pujols. As Pujols final few weeks of his MLB career is approaching, his accolades continue to build and the hype around some of the top Albert Pujols baseball cards are also. In addition to Pujols, Julio Rodriguez who landed at number one on the Hottest Sports Card Right Now July 2022 list continues to be front and center. Other sports stars landing on the list includes WNBA great Sue Bird, Look for a new group to follow in September Hottest Sports Cards Right Now. Prepare yourself today by reviewing all the new sports card releases for September.

Possibly the biggest impact on any sports card value is the performance of that player on their respective sports stage. If a player is competing for a league MVP award or chasing a major milestone such as 700 homeruns, the value of his or her sports cards will spike in overall value. Other performances such as hitting for the cycle or scoring 60 points in a single game can also drive the value of the cards. Follow the players performance especially if you are a sports card investor looking to flip sports cards or make money selling sports cards.

Many aspects can impact the value of a sports card including when players are traded or signed by a new team. In addition, the more important of the team signing a specific player could also have a major impact on the value of his or her sports cards. For example, if a player signs with the New York Yankees or New York Knicks the value will have a higher potential based on the market size of the team and the quantity of fans of those teams. If that same player is signed by a smaller market team such as the Tampa Bay Rays the value may not see the same increase in value.

Like many of the other factors impacting a player’s sports card, player hype and player ratings are another contributor driving sports card values. Much like the hype around player ratings in top sports games such as Madden Football or the NBA 2K franchise, player rating can impact the value of any young star’s careers. This occurs in many sports including MLB with the Top Prospects reports that are introduced before the season and during the middle of the season as well as high school prep rankings as players head to college.

When a team is performing well, players are performing well and vice versa. The better a team performs the more interest in the players on that team. Such as a team that runs to the Championship or a team dominating within their league as we have seen across Major League Baseball this summer with the Los Angeles Dodgers and New York Yankees.

Lastly, another factor that impacts whether a sports card is hot or is cold, is if that player wins any type of awards or contests or lands a big-time accolade. For example, a player winning the All-Star MVP, or regular season MVP award. Other examples could be someone who wins the Home Run Derby contest or leads the league in rushing yards. In addition, players joining specific milestones such as the chase to 700 home runs something that we are seeing in baseball with Albert Pujols can also drive values of their cards up and create a buzz for their cards.

The accolades and numbers continue to pile up for Albert Pujols as he continues to build on an already impressive Hall of Fame career. Pujols is slowly inching towards 700 career home runs while setting the record for hitting his 450th career home run off a different pitcher. Pujols has been red hot in August batting .393 with eight home runs and driving in 16 runs. 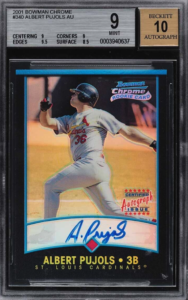 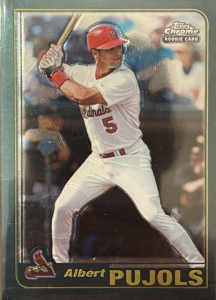 Despite taking a small step back, Julio Rodriguez continues to be the focal point of the baseball card industry as he is putting together a strong rookie MLB season. Now that success has landed him a new long-term deal that could pay him in excel of $400 million dollars. The face of the Seattle Mariners recently joined the 20/20 club while also ranking near the top of nearly every offensive category in MLB. His strong rookie season has him on pace to take home the 2022 American League Rookie of the Year award. 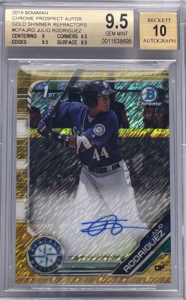 The long time WNBA All-Star Sue Bird is joining the ranks of other great sports stars set to retire at the end of their professional seasons. However, Bird is currently not set to retire as she has continued to led her Seattle Storm on a chase for another WNBA Championship. As retirement inches closer, Bird has put together a solid career that started back during the 2007 WNBA schedule. Over her career, Bird has averaged over 11 points per game to go along with at least five assists. 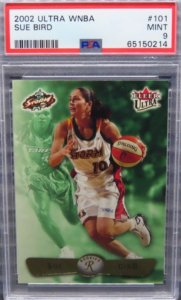 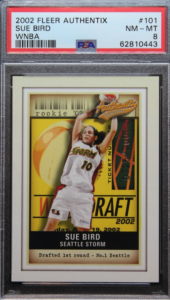 As his teammate Albert Pujols continues to steal the lights, Paul Goldschmidt continues to put together Triple Crown like batting numbers for the same St. Louis Cardinals team. Goldschmidt currently ranks 1st in MLB with a .333 batting average to go along with the 3rd most home runs (33) and 3rd most runs batted in (105). Numbers like that has positioned the Cardinals first base inline to potentially take home the NL MVP award. 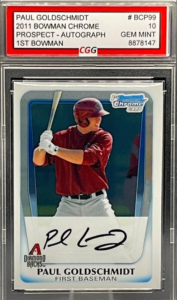 While the men’s World Cup is just around the corner, the focus on the women’s World Cup next year has turned attention to man of the top female soccer stars. One of those names making headlines is the 20-year-old soccer star and currently Washington Spirit forward Trinity Rodman. Rodman who has dominated the National Women’s Soccer League (NSWL) since being drafted at just 18 years old is a potential star for the USA women’s national team next year. 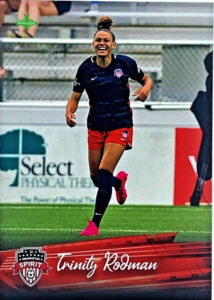 As the drama keeps heating up between the PGA tour and the LIV golf tour, Rory McIlroy found a way to storm back over the weekend to capture the Tour Championship and the FedEx Cup title. This marks the third FedEx championship of his career while adding to his tour win mark with his 22 win of his career. 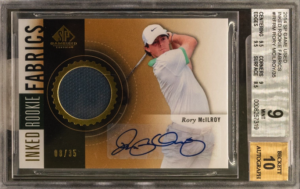 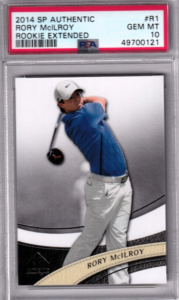 Yes, you read that correct, Baker Mayfield rookie cards landing on the hottest sports cards right now as he gets set to be the starter for the Carolina Panthers to start the season. As fans get excited for the upcoming season, a hot start to the 2022 NFL season could see Mayfield’s rookie cards spike in price as he looks to become the face of a new organization and potentially land a new long-term deal after the 2022 NFL schedule. 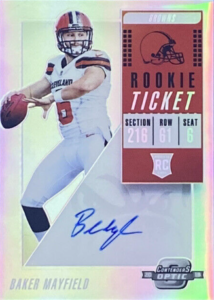 The Sacramento Kings 2022 NBA Draft pick is set to take center stage for the team this season after the elected to select him fourth during the NBA draft. As some NBA experts critiqued the move, Keegan Murray wasn’t bothered as he showcased his talents during a strong NBA Summer League performance. His performance now has calling for his potential to contend for the NBA Rookie of the Year. 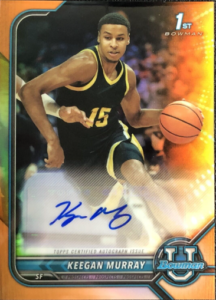 When you make a splash as a rookie you become a fan favorite within the sports card industry. That is the case with the New York Mets Brett Baty. Baty who the Mets selected in the 1st round of the 2019 MLB draft, made his MLB debut on August 17th, 2022. In his first MLB at bat, Baty picked up his first career hit with a home run. In 11 games for the Mets, the teams former first round pick has two home runs and five runs driven in. 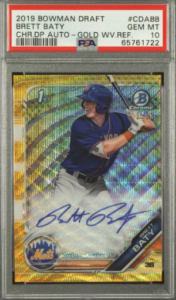 All eyes on the NFL rookies is starting to heat up as the 2022 NFL schedule is just around the corner. One of those rookies that will have a ton of hype on him in 2022 is Kenny Pickett who many expect to take over the Pittsburgh Steelers starting quarterback duties at some point possibly even the starting the team’s NFL week 1 matchup. However at this point, expectations are Mitchell Trubisky will be the starter, while Pickett is just waiting to hear his name called. 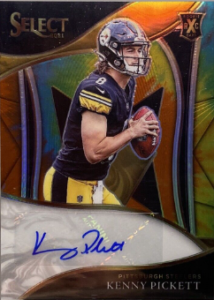 I have some of these cards, I have a few more I am curious about also like an authentic shaq signed card, along w other valued shaq cards with it.
I have the tigers tales cards in a collection I heard they were worth money, I have a Mickey Mantle card, Allen Iverson, Kobe, Charles Barkley, Emmit Smith, Troy Aikman, Manny Fernandez, and many more. Do any of these sound as promising as I was told??

Honestly depends on the years of those cards, the quality the cards are in, and whether they are graded.