One of the biggest driving forces behind which sports cards are hot and which sports cards are cold is the overall performance of the player. A player who is performing at a high level or one that accomplishes a major feat will see their value rise fast and become a hot card on the market. For example, a player who wins the MVP award or a rookie who gets red hot at the plate. While this may not impact all players such as proven veterans such as LeBron James, Mike Trout, and Alex Ovechkin, it can be for a player that is not proven or a rookie. Some if not most of the hottest sports cards right now are of players who are dominating within their sport.

As trades and signings are apart of the game, it also is a key part of the trading card hobby and can play a role in the value of a player’s card. For example, say you have a star player who has not had a ton of star power around him, the team signs another star player. This signing has a direct impact on the player potentially performing at a higher level, and the team performing at a higher level. Championships, MVP’s, and other awards have major impact on sports card values. The same can be said when a team trades for a player.

However, if the player who you are looking to collect is traded, it may come down to where he or she is traded. For example, if player unknown is traded from a small market team such as the Tampa Bay Rays to a team like the New York Yankees or Los Angeles Dodgers, his cards may become hot cards to collect. Whereas a player traded from a large market team to a smaller market, will have less fans collecting that team and potential cool of their sales.

Any hype that is hitting the news on a specific player can also have a major impact on a cards overall value and if it is hot or not. For example, a player returning from an injury who performs well in training camp or shows up to spring training in better shape. The hype built around their potential season can impact the interest in their sports cards. In addition, when player ratings are released from sites such as PFF or even a game such as Madden Football or NBA 2k. This creates a buzz around the that player and can overflow into sports card investors and sports card collectors.

When a team is performing well, players are performing well and vice versa. The better a team performs the more interest in the players on that team. Such as a team that runs to the Championship such as the Golden State Warriors have done in the NBA over the past 5-8 years. In addition, teams that are expected to perform better, or are performing better will see an increase in production from lesser-known players who can help their card value and interest. Consider looking at teams are trending up before the market turns to those players.

Lastly, another factor that impacts whether a sports card is hot or is cold, is if that player wins any type of awards or contests or lands a big-time accolade. For example, a player winning the All-Star MVP, or regular season MVP award. Other examples could be someone who wins the Home Run Derby contest or leads the league in rushing yards. In addition, players joining specific milestones for a specific number of points scored or joining the 500-home run club or 3,000 hit club. Lastly, a player signing a new contract can also help make the buzz around their card soar and land them on the list of the hottest sports cards.

The Seattle Mariners young All-Star Rookie Center Fielder Julio Rodriguez ranks at the top of the hottest sports cards right now. Rodriguez who is just 21 years old is putting together numbers that warrants the 2022 AL Rookie of the Year Award having 17 homeruns and 53 runs batted in through July 27th, 2022. In addition, Rodriguez has the Mariners in contention for an AL Wild Card spot. Meanwhile, Rodriguez is coming off a strong performance among the 2022 MLB Home Run Derby. 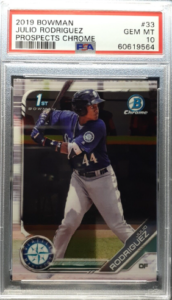 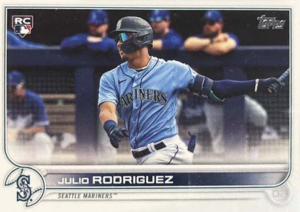 As the 2022 NFL Schedule is slowly approaching and the NFL training camps kicking off, one of the hottest names in the sports trading card hobby is the New England Patriots second year quarterback Mac Jones. While Ja’Marr Chase stole the show as the top NFL rookie in 2021, Jones put together a strong NFL season on paper and plays the premier position of quarterback. Add the fact he plays on one of the most popular teams in the NFL the New England Patriots and the recent comments from Bill Belichick makes him extremely popular within the card industry. If your looking to build your collection or invest in sports cards read our Hot 2022 Football Rookie Card list. 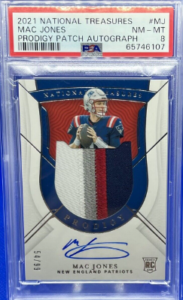 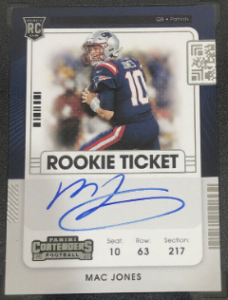 After a strong 2021-22 NBA season, the Golden State Warriors shooting guard Jordan Poole. Poole who played his college basketball with the Michigan Wolverines averaged 18.5 points per game to go along with 3.4 rebounds and four assists while being a key contributor for the Warriors during their 2022 NBA Championship run. While Poole is still blocked by the star power of the Warriors roster, Poole is making a strong name for himself and seeing his card interest rise. Poole has over 100 rookie cards on the market to choose and the sports cards are worth investing in. 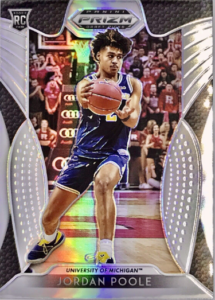 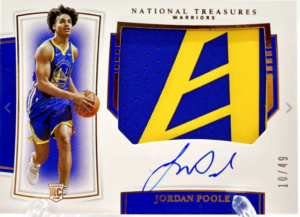 With the 2022 World Cup just around the corner, a ton of focus within the sports card hobby are turning their attention to soccer cards. One of the hottest sports cards right now is the France National team star Kylian Mbappe who is destined for a strong World Cup performance. While Mbappe often gets looked past as sports card collectors look to the likes of Lionel Messi and Christiano Ronaldo, his cards have higher upside for sports card investors. In addition, Kylian Mbappe lands on our Hot Soccer Cards to Collect World Cup 2022 list. 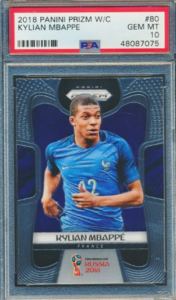 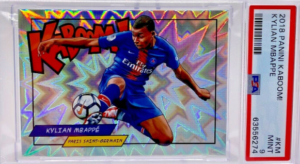 A name you must start to put on your radar if you have not yet is the Baltimore Orioles prospect Gunnar Henderson. Henderson, who was the number 33rd prospect among Baseball America’s Top Prospects prior to the season has seen his name rise to number seven at the mid-season point. Henderson is currently hitting .291 between the Bowie Baysox and Norfolk Tides has already hit 14 home runs and driven in 55 runs over just 83 games. 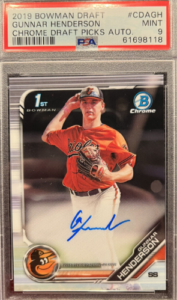 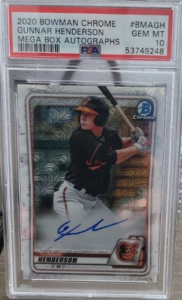 The 23-year-old All-Star outfielder is at the top of his game and among the top of the MLB headlines day in and day out. As Juan Soto continues to be the talk of Major League Baseball as many experts believe he will be traded before the 2022 MLB trade deadline, it is hard to imagine any team giving him up. Soto who just took home the 2022 Home Run Derby title, has 20 home runs and 45 runs driven in to go along with an .886 OPS through July 27th, 2022. Depending on which team possible lands him, his sports card value will increase. 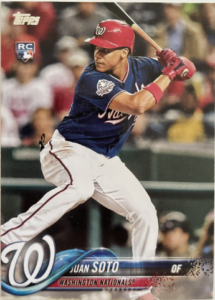 The time has arrived for Jalen Brunson to take center stage in one of the biggest cities in the United States on one of the most iconic arenas in the game Madison Square Gardens. Brunson who finished the 2021-22 NBA season averaging 16.3 points per game to go along with 3.9 rebounds and 4.8 assists is one of the most intriguing storylines to watch heading into the season. With Brunson being one of the top NBA free agent acquisitions this offseason, all hype is built around the New York Knicks point guard. 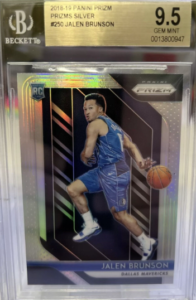 Keldon Johnson is another NBA player who’s basketball cards some of the hottest sports cards right now. Johnson who is just 22 years old, is set to continue to be a big force in the rebuild of the San Antonio Spurs during the upcoming season and into the future. The Spurs small forward is being praised by many experts this off-season as a potential most improved player candidate. Last season Johnson averaged 17 points per game to go along with 6.1 rebounds and 2.1 assists. As his hype continues to build leading up to the season, Johnson’s sports cards will too. If you are looking for other NBA cards to invest in or add to your collection check out our Hot 2022 Basketball Rookie card list. 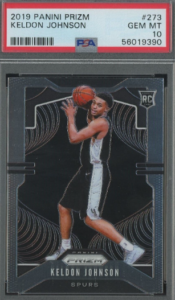 As all eyes have been on Julio Rodriguez of the Seattle Mariners, another MLB rookie having a big season is the Kansas City Royals top prospect Bobby Witt Jr. Witt who is just 22 years old, has gotten hot since his slow start for the Royals after getting his call up to the minors. In July the Royals short stop is hitting .312 with three home runs to go along with 12 runs batted in and 24 total hits. While his chances at the Rookie of the Year award is thin, Witt should make it an interesting down the stretch. 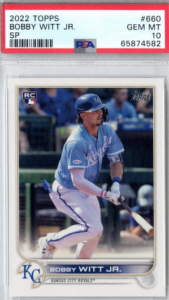 The NBA off-season has been built around the Brooklyn Nets and the moves the team has made or will make. From all the drama from last season including the trade that shipped James Harden to Philadelphia 76ers. Now with the potential trade of Kevin Durant as well as possible the move to trade Kyrie Irving, the Nets will look to some new stars for the upcoming season. One of those faces will be that of Cam Thomas of the Brooklyn Nets as he should see his potential to rise while also being a player sports card investors can make some money on. 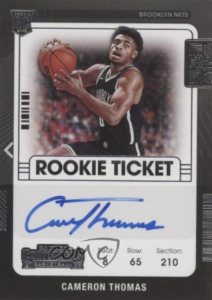 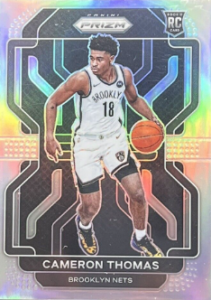 Nice info thanks! I just got back into collecting and Soto is my favorite. Good to hear he’s on the list.

If you can afford him, highly suggest going after him. Still so young and so much potential. Add in the return of Fernando Tatis in the lineup should free him up some better pitches.

I do also, only concern is how the public will view him coming back from the suspension. This should lower his overall value potentially before seeing it increase in value as he performs next season.

do you have tips on cards to invest in Peter

Investing in sports cards can be very difficult but can be learned through taking the time to research the hobby. For example, if you are looking to invest in graded sports cards take the time to review the Pop reports from the top grading companies that are available such as PSA Pop report, or the BGS pop report. Look at cards you are interested, see how many are graded of that individual card and at the higher grades. Graded cards of rookies/inserts with low Pop counts will have higher potential value and resale value. Stay tuned for a few new articles that will address tips on cards to invest in and other tips to help with sports card investing. As far as a tip in sports card flipping, learn more about prospects and upcoming events that may cause interest in a specific player or a group of players from a team. Purchase those cards, and then wait for the event such as the MLB Playoffs or the FIFA World Cup.

Garrett Mitchell speedster for the Milwaukee Brewers is on my list.

Not a bad option to consider, his prices are still reasonable.