The 2022-23 NBA schedule is in full swing as the calendar slowly begins to flip to November 2022. As the NBA season has just gotten off to a fast start, the opportunity to look around some of the top NBA Basketball Sports Cards to invest in has arrived. One basketball star that continues to put together a solid NBA resume is the Cleveland Cavaliers shooting guard Donovan Mitchell. Mitchell is one of those NBA players who slides under the radar despite putting together a solid stat line each night. As you start to look at Donovan Mitchell Basketball Cards to Invest In, it is hard not to like his potential moving forward.

Mitchell who was drafted by the Utah Jazz landed with the Cavaliers during an off-season NBA trade. The move has resurged the former Louisville Cardinals point guard as he currently ranks 4th in the NBA in scoring (32.2 points per game) and is tied for 1st in assists (7.3 assists per game) to start the season. Despite being just 26 years old, Mitchell is often looked past among the top basketball cards to collect making Donovan Mitchell basketball cards great to invest in. Read on to learn more about Donovan Mitchell Basketball Cards to invest in.

Before we get to some Donovan Mitchell sports cards to invest in, read our 10 NBA Sports card to buy right now that Mitchell lands on as well. If you are a new sports card investor looking to learn more about selling sports card read our COMC VS eBay VS Marketplaces article.

The big debate that has been on going over the past few seasons is “are basketball trading cards a good investment”? To answer that question, basketball cards can be very profitable and can also be a great investment opportunity. However before deciding on investing in sports cards or investing in basketball cards, you must also understand the risks associated and that no investing opportunity is guaranteed to produce returns.

What is the best brand of NBA cards to collect?

When it comes to deciding the best brand of NBA cards to collect it simply comes down to only one brand. That brand is Panini which is the official product of the NBA and the NBAPA. That said though Panini is just the brand, while the company produces upwards of 20-30 basketball sports cards products each season. While there are other sports card companies producing basketball cards including Topps and Wild Card.

Which sports card is best for investment?

Lastly when looking at which sports card is best for investment opportunities, the top options are rookie parallel cards, Rookie Patch Autos (RPA) and high-end inserts such as Panini Kaboom! Inserts.

After putting together a solid sophomore season with the Louisville Cardinals Donovan Mitchell entered the 2017 NBA Draft. A move that later rewarded the former Cardinals star with being drafted 13th overall to the Denver Nuggets during the 2017 NBA draft before being dealt to the Utah Jazz. Since arriving in the NBA, Mitchell has compiled a solid career resume over his first few seasons including being named to three straight NBA All-Star teams from 2020 to 2022, was named to the NBA All-Rookie First Team, and won the 2018 NBA Dunk Contest.

As a rookie Donovan Mitchell made his NBA debut on October 18th, 2022, against the Nuggets at home. In the teams 106-96 win, Mitchell posted 10 points to go along with four assists, one rebound, and one blocked shot. As the season progressed, on Mitchell slowly emerged as a threat as his minutes count increased, and his overall performance on the court improved. On February 2nd, 2018, Mitchell posted a season high 40 points to go along with six assists and five rebounds.

The success continued for the Jazz’s young shooting guard as he continued to improve in his second season as he not only improved his scoring but also his rebounding and court vision. Mitchell would finish the season improving his points per game average, assists per game, and rebounds per game. While Mitchell would miss the NBA All-Star selection, his overall performance took a step forward from his rookie season.

Mitchell would continue to develop in 2019-20 while headlining the group of the top shooting guards in the NBA with some of other top stars. The Jazz star would make his first NBA All-Star selection during the 2019-20 while helping to contribute to the team’s overall success as one of the top teams in the NBA Western Conference. Over the next two seasons, Mitchell would continue to put together strong stat lines while making the next two bringing his total to three heading into the 2022-23 NBA Schedule.

During the 2022-23 NBA off-season, the Utah Jazz traded Donovan Mitchell to the Cleveland Cavaliers for a package that included three first round NBA Draft picks, Lauri Markkanen, Collin Sexton, and rookie Ochai Agbaji. A move that has paid off for the Cavaliers to start the season as Mitchell through October 31st, 2022, currently ranks 4th in the NBA in scoring (32.2 PPG) and tied for 1st in assists (7.3 APG) in six games played.

Here are a few of the 2017-18 Panini Prizm Donovan Mitchell rookie cards to collect: 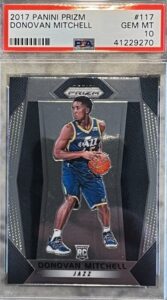 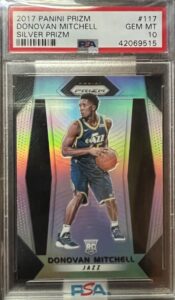 Get your Donovan Mitchell Silver Prizm RC today on eBay.

Another popular basketball rookie card to collect of Donovan Mitchell is his 2017-18 Panini Contenders Rookie Ticket Autograph numbered out of /125. In addition to the Mitchell Rookie Ticket Autograph, the 2017-18 Panini Contenders Basketball is loaded with other top tier rookie cards including Jayson Tatum of the Boston Celtics. 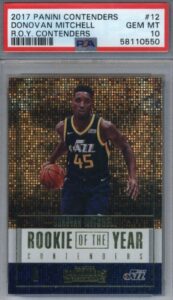 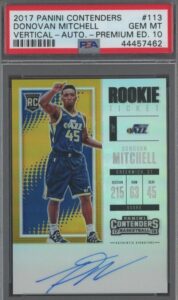 One of the highest end NBA basketball trading card products is that of the Panini National Treasures set that comes out each year. While the cards have extremely high price tags both brand new unopened boxes as well as singles pulled and sold on eBay and other marketplaces such as COMC. The base set features 1555 cards total including Rookie Patch Autographs or RPA’s numbered 101 to 149 while rookie autographs make up cards 150-159 with no cards slotted in at 115, 145, 147, and 152. 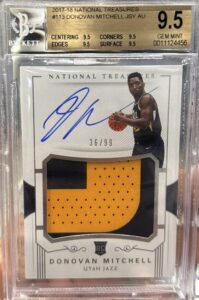 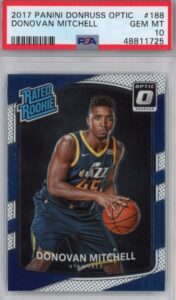 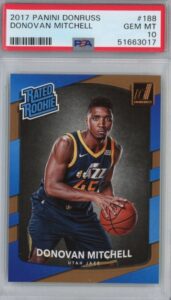