The 2022 MLB Season has yet to concede but that won’t slow us down from taking a look at the next wave of MLB Prospect Cards to invest in right now before the 2023 MLB schedule. While it may seem odd to consider investing in MLB baseball cards right now as we head into winter, the NFL season continues to heat up, and action on both the ice and hardwood has started to roll. However, there are a few reasons you should consider investing in MLB prospects cards now and not during the 2023 MLB season.

Read on to learn more about why you should invest in MLB prospects during the off-season, what makes a prospect card so appealing and so valuable, as well as our top MLB Prospects Cards to invest in picks. Before we get rolling if you are new to sports card investing, or new to flipping sports cards, take a look at our piece on selling on eBay VS COMC VS Marketplaces.

Why should you buy MLB Prospects cards during the MLB offseason?

Many sports card collectors begin to shift from one sport league trading card to another as the sports league season ends. This is a common trend with MLB baseball cards as we have seen at times while also lowering the value of baseball cards over that time frame. With winter approaching the time is a perfect time to invest in prospects that are expected to make a run at the majors during the upcoming MLB season.

While you can also look at current players as well, some of those players and former prospects may have already seen an increase in their overall values whereas finding the right prospect could return a nice return on investment or ROI.

What makes investing in MLB prospects cards are so appealing to sports card investors?

Depending on who you ask there are a few reasons why MLB prospect cards are so appealing to sports cards investors. One of those reasons is outside of the top tier prospects that are hyped up, there is a ton of value in MLB prospects. This value allows for you to have an opportunity to invest in sports cards with a future down the road to flip sports cards for a profit. Second reason is investing in prospects is similar to gambling delivering a thrill while waiting to see if you will win.

Who were some of the top rookies from the 2022 MLB season that should have been purchased last MLB offseason?

Before we take a look at the next wave of MLB prospects to invest in, the crop from 2022 MLB rookies that put together strong seasons included Julio Rodriguez of the Seattle Mariners, Adley Rutschman of the Baltimore Orioles, and Bobby Witt Jr of the Kansas City Royals. While each of these stars still have a huge upside, their values are much higher and will cost you more money to acquire. That said, if any or all of them pan out as the next Mike Trout, the values could double or triple over the next 5-10 MLB seasons.

How should you determine which MLB prospects cards to purchase/invest in?

One of the biggest questions sports cards collectors have is how much should I spend or invest in to one card? The first answer to that is, there is no right and wrong answer as everyone collects sports cards for their own personal reason. Baseball card collectors collect for the fun and thrill of the hobby, whereas sports investors and sports cards flippers do it for the potential to be rewarded with a nice ROI in the future.

That said you should consider multiple factors when deciding on which MLB prospects to invest in. Those factors include the following:

One player who got a brief stint with their Major League club during the 2022 MLB season is the Baltimore Orioles infielder Gunnar Henderson. Henderson enters the upcoming 2023 MLB season as the front runner to land one of the Orioles starting spots while also remaining eligible for the 2023 MLB AL Rookie of the Year award. Henderson dominated the Orioles minor league season before his call up to the Orioles in late summer. While Henderson Bowman prospect cards have seen an increase, look for his true value to shoot up with a full season in the Majors. 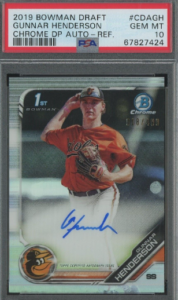 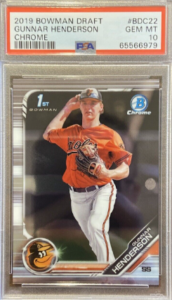 If you are looking for another potential stud entering the 2022 MLB season is the Minnesota Twins right fielder Matt Wallner. Wallner who was drafted by the Twins with the 39th overall pick during the 2019 MLB Draft put together a strong season in the minors before getting a called up at the end of the season. The Twins outfielder posted a .277 batting average in the minors to go along with 27 home runs and 95 runs batted in. Like Henderson, Wallner is expected to compete for an everyday position on the Twins 2023 MLB roster. 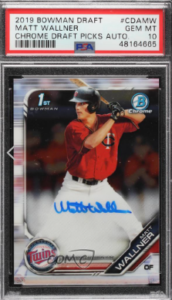 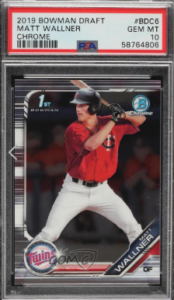 The son to be 21-year-old middle infield prospect of the Toronto Blue Jays is an interesting prospect and one that has the talent to be a stud in the majors for many years to come. Martinez, who was a former top international prospect, spent the 2022 MLB season playing for the Blue Jays double A affiliate New Hampshire Fisher Cats. Martinez finished the hitting 30 home runs to go along with 76 runs batted in while struggling posting just a .203 batting average. Nonetheless, the middle infielder has the potential to hit 25 plus home runs in an already dangerous Blue Jays lineup. 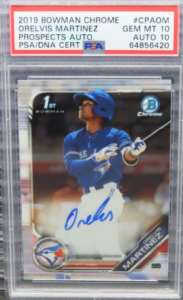 Start to learn the name Emmanuel Valdez of the Boston Red Sox as he is set to arrive at Fenway Park before you know it. Valdez will enter the 2023 MLB season as one of the top Red Sox prospects while being just 24 years old. Prior to landing with the Red Sox in a trade on August 1st, 2022, Valdez was another stud prospect in a loaded Houston Astros minor league system. Overall, between double A and triple, Valdez combined to hit 28 home runs, bat .296 and drive in 107 runs for the two teams.

While there are none available at this moment, keep an eye out for his baseball cards.

If it wasn’t for an injury that forced Grayson Rodriguez to miss a significant portion of the 2022 MILB season, the Baltimore Orioles top pitching prospect would have landed at Camden Yards during the MLB regular season. That said, Rodriguez in an interesting prospect with a ton of upside, but an arm injury and limited work has limited the rise in his overall baseball card values entering the MLB off-season. Look to add some Grayson Rodriguez baseball cards to your collection before he gets his shot in the major’s next season. 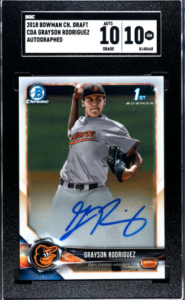 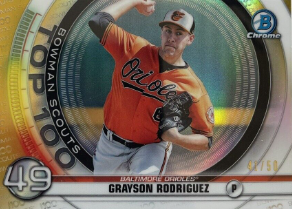 The potential is all there for the Chicago White Sox minor league prospect Oscar Colas. Like most of these prospect’s availability of Oscar Colas baseball cards is thing with only a few products featuring the White Sox outfielder including Bowman which offers his Bowman Prospect and Bowman Prospect autograph cards that have extreme potential to skyrocket in value over the next 1-2 MLB seasons depending on his path to the majors. 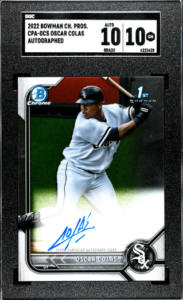 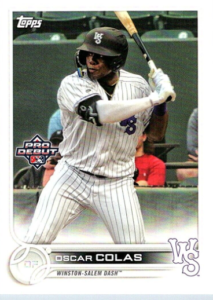 As we have seen over and over the Tampa Bay Rays are notoriously good at finding top tier talent through the MLB draft. That is exactly that case with the team’s 2021 2nd round MLB Draft pick Kyle Manzardo who took a huge stride during his first full MILB season with the Rays. The potential power hitting first baseman posted 22 home runs to go along with 81 runs batted in between high A ball and double AA for the Rays minor league affiliates. 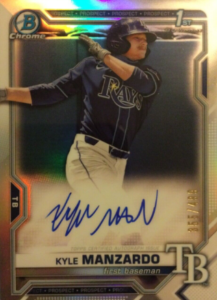 Always looking for the next big time power hitting threat can be a task, but the Chicago Cubs may have found their next stud at the corner infielder position with Matt Mervis. Mervis who was drafted by the Washington Nationals during the 2016 MLB draft, is set to arrive at the big-league level potentially at some point during the 2023 MLB schedule. With his potential arrival at the next level, it is hard not to consider investing in Matt Mervis cards now. 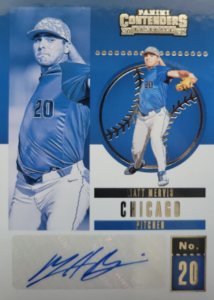 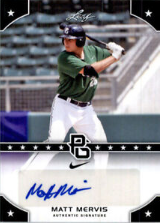 As a sports card investor the Houston Astros are one organization to scout when starting to look for cards to flip. The Astros have produced MLB stud one after another and the same can be said for their 25-year-old outfielder Justin Dirden who is often looked past in an organization loaded with young talent. Nonetheless, the time is right now to invest in Justin Dirden baseball cards before he gets his callup to the majors in the foreseeable future.

Stay tuned for new products featuring Justin Dirden to hit the market in the future. For now, add Dirden to your prospect watch list.

Last player to consider investing in right now is the Cincinnati Reds third base prospect Christian Encarnacion-Strand. The power hitting infielder will be just 23 years old at the beginning of the 2023 MLB season while potentially offering the Reds a power bat for the middle of the lineup. The Reds landed Encarnacion-Strand in an August MLB trade that sent Tyler Mahle to the Minnesota Twins. Encarnacion-strand finished the 2022 MILB season at double A while combining to hit 32 home runs, drive in 114 runs and post a .304 batting average. 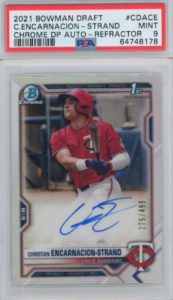 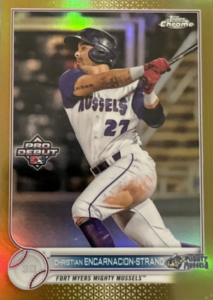