The evolution of sports card continues to evolve as so does the History of Baseball Cards as today they are known as great alternative investments to stocks. Since the earliest days, baseball cards have been a passion of sports card collectors around the United States while becoming more popular in the early 1960’s through modern day baseball collecting. Once a hobby that grew so big that sports cards stores were found in nearly every major city in the USA, now evolves around the use of technology including online websites as well as sites such as Amazon and eBay with huge followings on baseball cards reddit sites and Facebook baseball card groups. 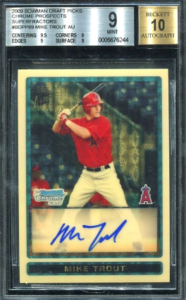 As we start to look at the history of baseball cards, the first thing many people think when they hear the words baseball card is a piece of cardboard. Depending on who you ask or talk to sports cards with, individuals from the mid 1950’s through early 1980’s may say I used to put them in my bike spokes while others said they collected baseball cards, but their parents threw them away. You will even get the occasional response that they used them to pitch against friends with the winner keeping the cards.

Before you know the card, industry was booming in the late 1980’s led by the introduction of Upper Deck Baseball cards that included the Ken Griffey JR Rookie Card. This created an insane buzz leading to baseball card collectors to spend time looking for sports card near me as well as traveling to baseball card shows around the United States. The boom would only last so long before a strong collapse and an eventual strong return that has seen sports cards including top rookie’s cards including the Mickey Mantle Rookie Card, Mike Trout Rookie Card as well as Honus Wagner cards to skyrocket in price.

After the Peck and Snyder baseball cards, the next wave of baseball cards would be released by Goodwin & Company that also owned multiple tobacco companies. These baseball cards are often referred to as tobacco cards and are highly collectible sports cards in today’s market that were packaged as a gimmick to cigarette smokers found inside the packs. Others tobacco companies followed along including the American Tobacco Company (ATC) who would introduce one of the most sought out sports cards all-time and one of the most expensive baseball cards ever. That card is the T206 Honus Wagner card that was included in cigarette packs despite Honus Wagner indicating he did not want his card in the product to prevent children from smoking.

Finally, nearly 18 years, later the first mass production baseball card set hit the market as the Goudey Gum company introduced the first baseball card product sold to the market that featured a stick of bubble gum the 1933 Goudey Baseball Card. The set is loaded with Hall of Famers including greats such as Ted Williams, Lou Gehrig and Babe Ruth. Within the 240 card set, Babe Ruth was featured four different times. Over the next few years various gum companies and other companies would produce baseball cards including Play Ball Cards which was released by Gum Inc of Philadelphia which also features the 1939 Ted Williams Rookie Card.

As the baseball card ERA continued to march on the introduction of the Bowman Baseball ERA arrived with the introduction of the 1948 Bowman Baseball set which was produced by Gum Inc. The initial 1948 Bowman Baseball Set Checklist consists of just 48 total cards including the Stan Musial Rookie Card. In addition to Bowman, LEAF introduced their first set of baseball the 1949 Leaf Baseball cards that feature Jackie Robinson and Satchel Paige Rookie Cards. Over the next few years Bowman would strike gold releasing sets of some of the greatest Baseball Players to play the game including the 1951 Mickey Mantle Rookie Card (1951 Bowman). 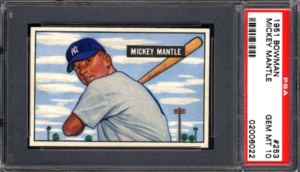 The time had arrived for Topps Gum Company to break on the scene while becoming the face of the industry till modern sports card collecting of the 2000’s. Topps released their first product in 1951 the Topps Red Back product and followed that product up with the 1952 Topps Baseball Card Set that features another popular card of Mickey Mantle. Topps and Bowman would dominate the market for many years with Topps holding the rights to producing baseball cards till the early 1980’s.

After once being dominated by the Topps Monopoly, the baseball card landscape began to change as both Fleer and Donruss won the rights to start producing baseball card sets and products. This was what many considered is the start of the Junk Card ERA or the Junk Wax ERA. While baseball cards grew in popularity, products would begin to be over produced and even printed years after the products would be released. As Donruss and Fleer were strong companies, new companies emerged with new designs, state of the art sports cards and holographic photos. These companies included companies like Upper Deck who changed the industry releasing the 1989 Upper Deck Baseball Card set that featured the Ken Griffey Jr Rookie Card. In addition, other companies such as Flair also put their stamp on the market. In addition Beckett Monthly and Tuff Sports grading guides, helped allow customers to see market prices of cards which led to an increase in card collecting and potential investment opportunities. 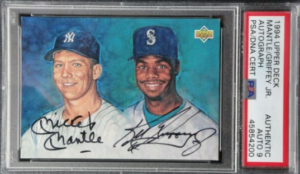 eBay and Check Out My Cards (COMC)

With the heavy demand for graded baseball cards, new companies have emerged to compete with the top sports grading companies including Certified Sports Guaranty (CSG) as well as Artificial Intelligence (AI) Sports card grading. In addition, Sports Card Breaking or Box Breaks have allowed collectors a new way to collect without the need to purchase full box products, but individual players or teams based on the break they join.