The sports calendars are starting to heat up as we approach the end of October 2022. Major League Baseball playoffs are front and center, the NFL Schedule 2022 rolls into Week 7, the NHL schedule and NBA schedules get started, and the 2022 FIFA World Cup is just around the corner. With all this action the interest is sports cards continue to trend upwards while values continue to soar. Whether you are a sports card collector or a sports card investor looking to make money with sports cards, knowing which sports cards are hot right now is important. Read on to see the Hottest Sports Cards Right Now October 2022.

As you start to look at the hot sports cards, take the time to also look at some of the hot new sports card new releases that have hit the market in October by looking at the Sports Card New Release Calendar. Leading the charge of some of the hottest cards right now is a group of talented MLB stars such as Bryce Harper, Juan Soto, and Aaron Judge. Around the other major sports players such as Josh Allen, Zion Williamson, Conor McDavid, and Kylian Mbappe are also at the tops of the sports cards to collect list.

One of the major factors impacting whether a sports card is hot or cold is the players own performance on the diamond, field, ice, and hardwood. A player that is performing red hot will drive the value of their sports cards up while creating a buzz for their cards. A player that is struggling for an extended period of time could see their card values drop. Sports card collecting and sports card investing is similar to day stock trading.

A second factor impacting sports cards for current players is whether or not they are injured. Injured players who are out for an extended period of time will see their sports cards drop in value and interest. However, for sports cards investors, this is an ideal time to buy and wait for the player to recover.

Any news surrounding the player or team can have an impact on the interest and value of the players sports cards. For example, a player such as Fernando Tatis who was not only injured but also suspended for performance enhancing drugs will see their cards drop.

If you are collecting a player for your own Personal Collection (PC), it is hard to see a player get traded especially when a player is on a team you root for. However, some cases a player being traded or signed by a new club can drive their values up especially when the player leaves a small market team to join a big market team. For example, a team electing to leave a team like the Tampa Bay Rays to join the New York Yankees.

Lastly any trends revolving around the sport can drive the interest in sports cards of that sport up even if it is for the short haul. Upcoming trends in October impacting sports cards values include the start of the NBA and NHL seasons, the MLB Playoffs, Aaron Judge chasing the AL Home Run record, and the upcoming FIFA World Cup.

One of the hottest players in sports cards right now is the New York Yankees All-Star outfielder Aaron Judge. Judge who broke the AL Home Run Record to start October hitting a new record 62 home runs also has helped guided his Yankees team to the 2022 ALCS. While Judge’s top rookie cards and Bowman prospect cards are costly, it is easy to see his cards increase in value. In addition, over the next few months, Judge will be front and center as he becomes an MLB free agent. Here are a few of the hot Aaron Judge baseball cards on eBay. 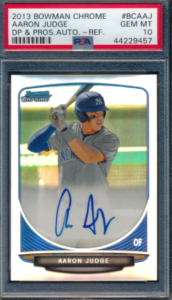 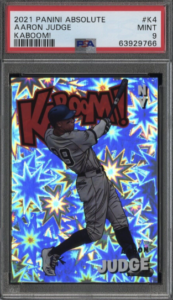 Grab a box today on Amazon!

Once the big talk of the NBA has once again returned to the top of the hype list as the 2022-23 NBA Schedule has tipped off. After the Pelicans made the 2021-22 NBA Playoffs, expectations are set higher as Zion Williamson enters the season healthy and ready to return to the form that landed him to the Pelicans at the top of the NBA Draft. The Pelicans star didn’t disappoint in the teams opening night win over the Brooklyn Nets. Williamson made the season debut scoring 25 points to go along with nine rebounds and three assists. With continued success, expect Williamson rookie cards to increase in value. Here is a few Zion Williamson basketball cards hot right now. 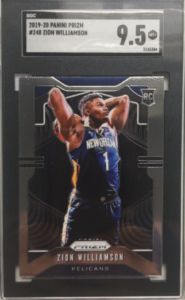 Get yours today on Amazon. 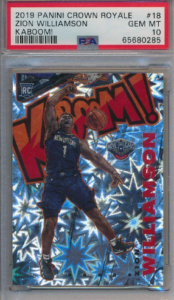 If the 2022 NFL schedule ended today the Buffalo Bills quarterback would more than likely take home the NFL MVP award. In addition to putting together some of the best numbers among all NFL quarterbacks, the Bills quarterback has them at 5-1 to start the season and atop the AFC Conference through the first six weeks of the NFL season. With expectations high for a Super Bowl title in Buffalo, a deep run into the playoffs and a Super Bowl title will drive his cards up and up. Here are a few of the hot Josh Allen football cards. 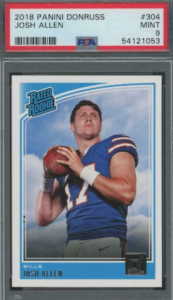 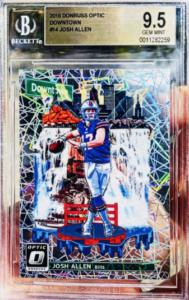 One of the faces of soccer is the Manchester United star Erling Haaland. While Norway will not be playing in the 2022 FIFA World Cup, it won’t have any impact on card sports card values of Haaland. Haalandhas pot together a strong season for the United while taking hom the Premier League Player of the Month award in August. Here is one of the hot Erling Haaland soccer cards. 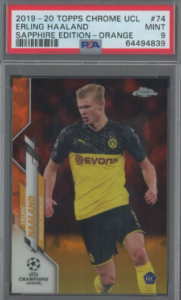 As you look around the NHL, the league is filled with many great stars with Connor McDavid ranking as one of the best players in the league. The Edmonton Oilers center is off to another hot start while chasing another Hart Trophy. McDavid has won the award twice with his first coming in 2016-17 and the second during the 2020-21 NHL season. Currently McDavid has racked up four goals and two assists over the clubs first three contests of the season. Here are a few of the hot Connor McDavid cards. 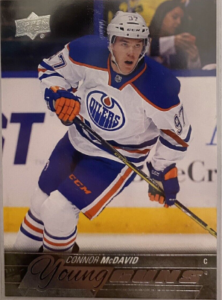 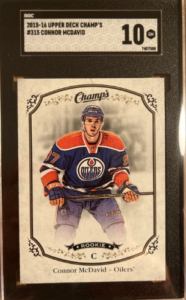 After failing to make the playoffs last season, the San Diego Padres have rebounded during the 2022 MLB season despite not having Fernando Tatis Jr within the lineup. Some of their success is due to the addition of Juan Soto and Josh Bell at the 2022 MLB trade deadline. The move provided the Padres with one of the top MLB players in the game and potential NL MVP candidate. Soto as well as Manny Machado have the Padres in the NLCS with a chance to head to the 2022 World Series. Here are a few of the hot Juan Soto baseball cards. 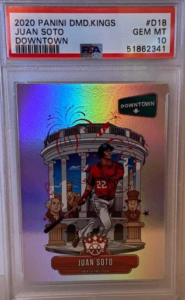 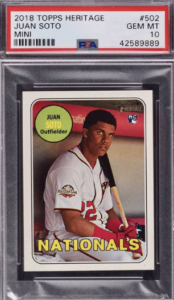 While Josh Allen is the current front runner for the NFL MVP award, another quarterback making waves is the Philadelphia Eagles quarterback Jalen Hurts. Hurts currently ranks 8th in the NFL in passing yards (1,514), 7th in QBR (59.6), and has 12 total touchdowns while leading the Eagles to a 6-0 record to start the season. As the Eagles continue to dominate the NFC, a strong finish to the season and a shot at the NFL MVP award could drive Hurts hottest cards to the ceiling. Here are a few of the hot Jalen Hurts football cards. 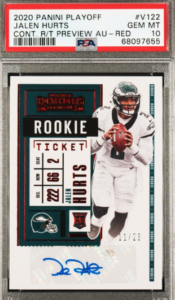 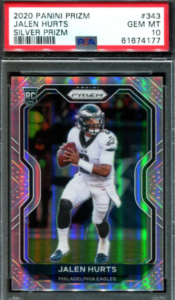 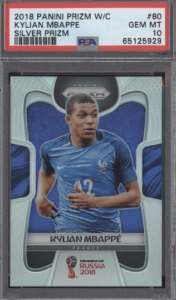 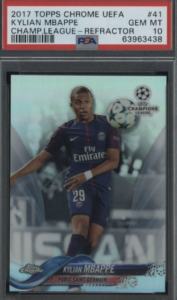 Despite missing a chunk of the Philadelphia Phillies game due to an injury Bryce Harper continues to be one of the best players in the National League and a strong NL MVP candidate. After a strong finish, Harper has put together a strong playoff performance while helping the Phillies reach the NLCS with a chance to read the World Series. Here are a few of the hot Bryce Harper baseball cards. 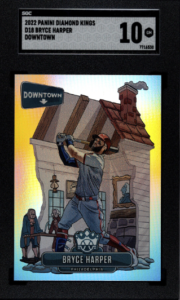 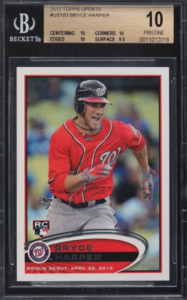 Landing at number 10 as one of the Hottest Sports Cards Right Now in October 2022, is the New England Patriots quarterback Bailey Zappe. Zappe who had to step in as the team’s starting quarterback after both Mac Jones and Brian Hoyer went down to injury. After taking over in a overtime loss to the Green Bay Packers in his first appearance of the season, Zappe has led the Patriots to back to back wins. Over his three games, Zappe has thrown for 596 yards to go along with four touchdowns and just one interception. Could there be a potential quarterback battle in New England? Here are a few of the hot Baily Zappe football cards. 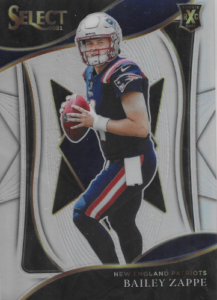 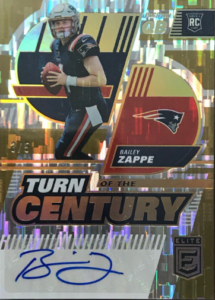