The Junk Wax ERA: Throw Back! 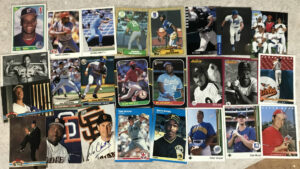 Now to answer that question is nearly impossible today as no one has the power to predict the future let alone see the future. For every sports card collector that is familiar with the Junk Wax ERA, it is alright to take cautions and worry. For everyone else not familiar and continue to wonder what the Junk Wax ERA is, we will look back at another time of sports card collecting that was booming, new state of the art sports card products being released, and high prices were seen on new unopened sports card products as well as single card sales.

If you are wondering what Junk Wax is and why it is talked about within the sports card industry, you more then likely did not collect during that time frame. Junk wax is exactly what it sounds like. Junk wax are sports cards that have little to no value and produced during the Junk Wax ERA. The Junk Wax ERA has played a historic role within the history of baseball cards.

Over Produced & No Set Print Runs

One key component of the Junk Wax ERA and what was the main contributor to it becoming the ERA we all know of it as was the fact the products were over produced with little to no dedicated set runs. What this means is companies such as Topps, Donruss and Fleer turned the printers on extreme speeds, hit the print button and set it to continue printing till they felt it was good to turn off. This increased the quantity of each card produced and ultimately over flooding the sports card hobby.

At the time though it wasn’t a bad thing if you were a sports card dealer, sports card shop or someone hosting a sports card show. You could expect to sell products at high volumes with rookie cards of the top stars as well as stars who would be bust such as Todd Van Poppel fetching solid sale prices. Unfortunately, that success wouldn’t last as people slowly figured out previous year products were still being produced based on the popularity of each individual item.

Higher Volumes = Little to no Demand

With individuals seeing this speculation and hype, a new buzz and type of card collector was created as individuals stockpiled products and individual cards of players with the hopes of becoming rich or at least have a solid investment portfolio to help retire.

With the buzz and the Junk Wax ERA booming, prices of products increased as new products were released such as with the release of the 1989 Upper Deck product line that saw single packs increase upwards of $1 dollar a pack. Over the early 1990’s higher priced products with hit the market including products such as Flair, Leaf and Upper Deck SP.

As product prices were increases, card sale prices were also increasing including star rookies and prospects. This included the likes of Ken Griffey Jr, Barry Sanders, Shaquille O’Neal and even a long list of MLB prospects that failed to meet the expectations set forth.

Lastly with the buzz and interest in the hobby, sports card shops and card shows could be found in every state across the United States. Sports card shops were in nearly every township within a state with some larger cities and townships having multiple locations available.

In addition, card shows could be found nearly every weekend in malls or hotel conference rooms. There was no google to search or Facebook/Social Media to promote it. The newspaper and Beckett Card Magazine was the key driver as well as the local card shops promoting it.

During the entire Junk Wax ERA, many great rookies were introduced across the wide variety of sports including the likes of Ken Griffey Jr, Derek Jeter, Bo Jackson, Shaquille O’Neal and Barry Sanders. Despite being featured during the ERA, graded PSA 10 and graded BGS 10 rookie cards of those are still solid investments and can bring solid returns. To learn more about sports card grading take a look at our sports card grading guide as well as to see who company is better: PSA or BGS?

Other items that still have some value during the Junk Wax ERA are lower print run products such as the 1993 Upper Deck SP Foil products as well as error cards such as the Frank Thomas No Name card that are harder to obtain. In addition products like the Topps MLB Desert Shield collection. 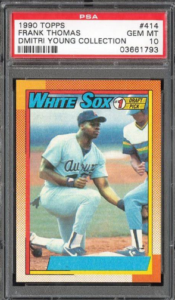 Honestly, as far as an investment opportunity it is hard to see anyone buying Junk Wax products to land a huge pay day in the future. Yes, as many of these products were thrown away, used in bike tires and even used as fire starters, the likelihood the value increases to much is very unlikely. That said, the product is cheap and can be entertaining for anyone to open and look back at the past. Who knows you might even get lucky and land one of those crazy error cards or immaculate rookie card that could land a Gem Mint grade.