The New York Jets continued their improbable start to the 2022 NFL Season as they push their record to 6-3 on the year while trailing only the Buffalo Bills in the AFC East Standings. A Buffalo Bills team that they knocked off 20-17 during Week 9 of the 2022 NFL season. With the Jets looking as one of the most improved teams in the NFL, the team’s recent success also has a key impact on the value of quarterback Zach Wilson sports cards. The big question moving forward that some sports card investors and collectors are asking is should you buy or sell Zach Wilson sports cards right now?

Wilson who played his college football at BYU, has battled some injuries since the Jets drafted Wilson with the team’s second overall pick during the 2021 NFL Draft. Including missing three of the team’s first nine games this season. However, despite the games missed, Wilson has shown improvements over his 2021 NFL season performance during his NFL rookie season. The Jet’s quarterback despite not putting together the strongest of offensive numbers at the quarterback position, has the team fighting for an AFC Playoff position as well as a shot at the AFC East Championship.

Read on to learn whether you should buy or sell Zach Wilson sports cards as well as some Zach Wilson rookie cards to buy. If you’re a sports card investor read our Top 10 Panini National Treasures World Cup cards to collect as well as our Donovan Mitchell Basketball Cards to Invest in articles.

While the New York Jets success is amazing and it can help drive up the value of their second-year quarterbacks rookie cards, the potential deep run of the Jets including a playoff run opens up a chance for Zach Wilson rookie cards to jump in price later during the season. Before deciding to invest or sell, remember buying/selling sports cards present a potential risk of loss so be wise before any decision is made.

After being selected by the New York Jets with the second overall pick during the 2021 NFL draft, Wilson put together a roller coaster of a rookie season during the 2021 NFL season. Wilson finished the season completing 55.6 percent of his passes for 2,334 yards to go along with nine touchdowns to 11 interceptions. In addition, Wilson added 185 yards on the ground and four rushing touchdowns in 13 games played. During the teams Week 4 27-24 win over the Tennessee Titans at home, Wilson put together one of his strongest games of the season throwing for 297 yards to go along with two touchdowns and just one interception.

After missing some time to start the season, Wilson has returned, and the Jets are rolling including a key win over division rivals the Buffalo Bills during Week 9 of the 2022 NFL schedule. With the Jets sitting just a half game back of the Bills in the standings and within a playoff spot within the conference, Wilson has become a face of the team to watch down the stretch. Currently through Week 9, Wilson has thrown for 1,202 yards to go along with four touchdown passes and five interceptions.

Despite his actual performance numbers on the field, Zach Wilson sports cards are an interesting option to buy and one that has the potential to see an increase with a deep NFL Playoff run. As you start to look at Zach Wilson sports cards, many of Panini 2021 NFL trading cards have hit the market with some higher end models still arriving each month including among the 2022 November Sports Card releases. 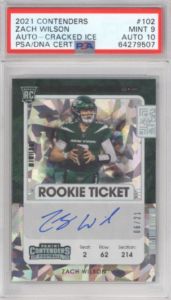 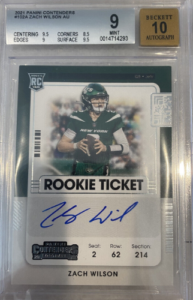 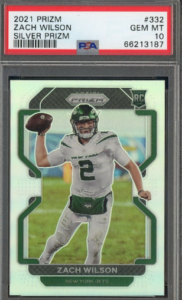 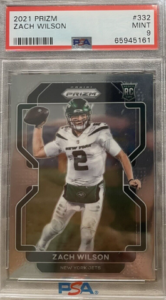 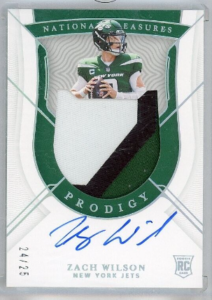 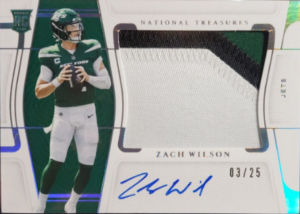 Other Zach Wilson Sports Cards to Invest Include: 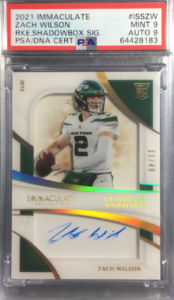 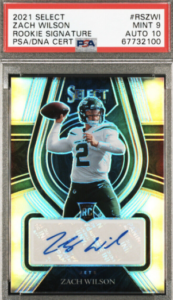 Get your Zach Wilson Sports Cards from 2021 Panini Select Football on eBay Today. 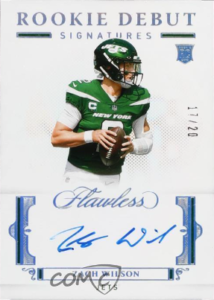 Get your Zach Wilson Rookie Cards from 2021 Panini Flawless Football on eBay Today. 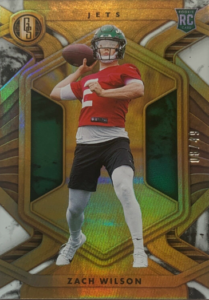