Sports Cards Trending Up and Down Right Now

The sports schedule continues to heat up as the sports calendar begins to fill up. With the action filled on the calendar, many sports are entering their prime time including the NFL which is rolling into week 5 of the NFL schedule 2022, the NBA season and NHL seasons just around the corner, the MLB playoffs beginning, and the 2022 FIFA World Cup approaching fast. As many of those sports see their sports cards trending up, player cards from teams missing the MLB Playoffs will slowly start to trend down.

When you are considering when the best time to buy and sell a sports card many factors impact the sports card trending up or trending down. One of the main factors influencing whether a card is trending up or down is whether that play has a chance to improve his/her performance.

For example, a quarterback like Kenny Pickett who lands on the Hottest NFL cards to collect right now list, benefits from the NFL season just beginning and him taking over as the starting quarterback. Meanwhile a player like Adley Rutschman who is now done for the season as the Baltimore Orioles failed to make the playoff will trend down for a few months.

October 2022 Sports Cards Trending Up and Down Right Now

Can the sporting schedule impact the value of a sports card?

Can you make money buying sports cards of an individual sport when the season is over and reselling when they are playing?

Yes, you absolutely can but you must take the time to learn the trading card industry especially the buy and sale side of the industry. Take the time to study market trends of specific players you want to buy now and sell later, see if the card is losing value or staying steady. Also, research expectations for the player and the team they play on. This approach is a longer sports card investing approach but also one that will allow you to flip sports cards for a profit. 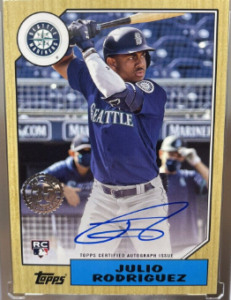 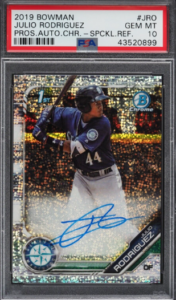 The Pittsburgh Steelers rookie Kenny Pickett was recently named the team’s starting quarterback moving into week 5 of the 2022 NFL schedule. While Pickett’s rookie cards were already at the top of the list among the 2022 NFL Draft class, Pickett’s play down the stretch could have a major impact on his selling prices and actual trading card value. Looking at Kenny Pickett’s rookie card, 2022 Panini Score Football Auto saw a major increase over the past week. On October 1st, 2022, one sold for $74.95 while two recently sold for $199.99 on October 3rd, 2022, and $301.98 on October 5th, 2022, after being announced the starter. 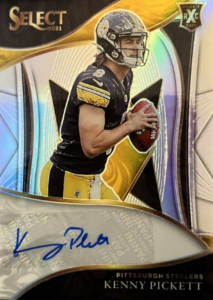 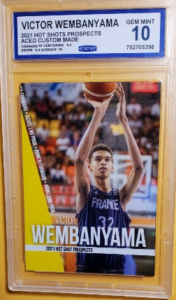 With the upcoming F1 race in Japan, Lewis Hamilton cards continue to be an interesting sports card to invest in as he continues to be one of the biggest names within the sport. Hamilton will look to pick up another win at the Honda Japanese GP that takes place on October 9th, 2022, at Suzuka International Racing Course. Hamilton is currently 6th in the Formula One Standings 2022. 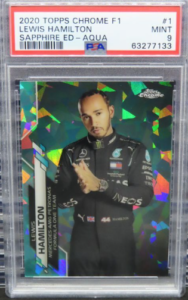 One 2022-23 NBA rookie to watch is the Dallas Mavericks guard Jaden Hardy who the team acquired during the 2022 NBA Draft. Hardy who played for the NBA G League Ignite last season is a player who can put together a big season after a strong Summer League as well as an opening debut in the Mavericks first preseason contest. While Jalen Hardy rookie cards are hard to come by as few 2022-23 NBA sports card products are out, they will start to hit the market soon. 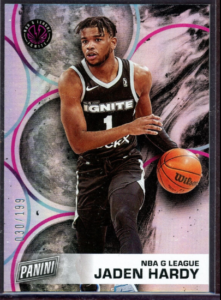 Other Player’s whose Sports Cards are Trending Up

Coming off a hot start to the 2022 NFL Season, a pair of injuries in back-to-back week, and being ruled out for at least week 5 with a head injury could have a major impact on the direction of Tua Tagovailoa rookie cards. With concerns over the health of Tagovailoa and how he will return to the field, rookie card prices could start to slide till the Miami Dolphins quarterback showcases his ability to play at a high level once again. 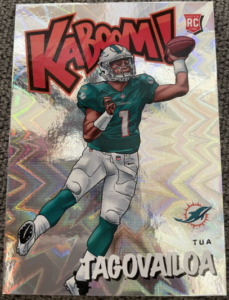 In Indianapolis Jonathan Taylor is struggling to rebuild the success he had during the 2021 NFL season in which he led the NFL in both rushing yards and rushing touchdowns. In addition, now Taylor is battling an ankle injury that will force him out of the Colts lineup against the Denver Broncos on Amazon’s Thursday Night Football. Continued struggles, games missed, and any type of production from another Colts running back could impact the Jonathan Taylor rookie cards in a market that is far less than the quarterback position. 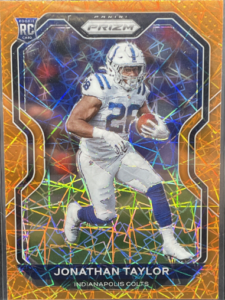 Despite the terrific rookie season for the Baltimore Orioles Adley Rutschman, the AL rookie will come up short of the AL Rookie of the Year award while the team fails to make the playoffs. While we don’t expect to see his cards tumble to far in price, we also don’t expect to see them jump in price despite the huge expectations set on his shoulders. Stock up now in preparation for the 2023 MLB schedule with the hopes his success at the plate continues. 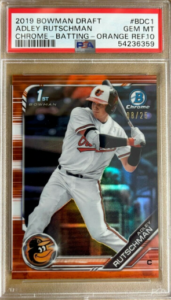 Other Player’s whose Sports Cards are Trending Down