The sports world continues to dominate the headlines while the NFL and football sit at the top of the sports landscape in the United States. One aspect of the sports world that continues to see heavy interest is sports card collecting including football trading cards. With the heavy demand and interest in football trading cards as well as sports cards, the sports card prices continue to increase in extreme values. As we have seen with the Top 10 Most Expensive Baseball Cards 2022, most if not all the Top 10 Most Expensive Football Cards 2022 are growing in value.

Headlining the list of the Top 10 Most Expensive Football Cards as of 2022 is a tandem of talented quarterbacks in Patrick Mahomes and Tom Brady as well as Joe Namath. Currently Patrick Mahomes sits atop the most expensive football cards All-Time with his record $4.3 million sale back in July 2021.

In theory the older the cards are and the better of the condition of the card is in the higher value of the football card.

Rarity of the Football Card

Like anything from rare antiques to extremely hard to find baseball cards, the rarer the football card is the more value the card presents. Now that said, cards have the potential to be rare right out of the pack of new release football card products as well as vintage football cards that receive high grades from third party grading companies such as BGS, PSA, CSG, and SGC.

With modern day football cards many factors can impact the rarity of the card including whether the card is a parallel, what type of parallel the card is, whether the card is numbered, has an autograph, features a piece of memorabilia, and is a football rookie card. For example, Panini Contenders Rookie Ticket Autographs contain an autograph and are typically numbered such as the Playoff Contenders Rookie Ticket Tom Brady rookie card numbered out of 100.  Some of these numbered cards can be numbered as low as one of one.

One of the biggest trends in sports cards today is sports card grading which has boomed since the start of the pandemic. When it comes to football cards the value of the football card can vary based on the graded received from one of the many top sports grading companies. A football card that is ungraded will have a lower sale value compared to a graded football card with a grade of 9 or 10. Sports cards are graded on many factors including the condition of the corners, the surface, and centering.

When comparing the top two Tom Brady Playoff Contenders Rookie Ticket autograph an BGS 9 sold for $3.1 million dollars compared to a BGS 8.5 that sold for $2.25 million dollars. In addition, grading vintage football cards can also drastically drive the value of the card up based on the population report of each specific card. Not sure what sports card grading company is better? Read our articles comparing BGS VS PSA, PSA VS SGC, CSG VS BGS, and BGS VS SGC.

Lastly another key factor impacting the value of sports cards is how the player is playing and whether they receive any types of awards or promoted to starter. For example, an undrafted quarterback wins the starting quarterback position, the value of his card shoots up in price while a player struggling and loses his starting position will see a drop in his value. 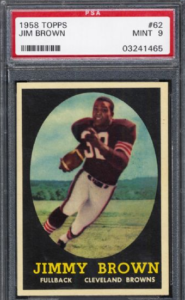 (Same image as above, could not track down correct serial number) 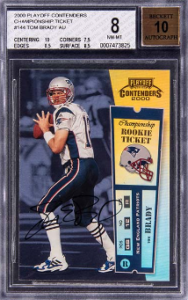 (Same as above, not same card sold) 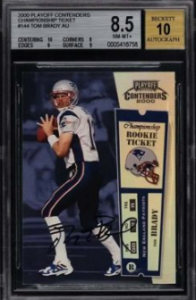 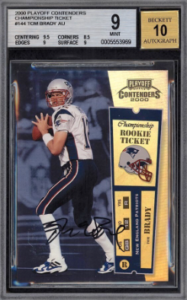 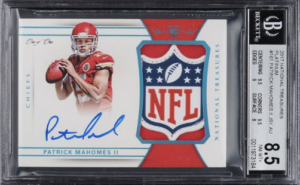