The 2022-23 NBA Schedule is in full swing as the calendar month of October is approaching the end. As the NBA season continues to pick up on the hardwood, the NBA sports card market will also be red hot as proven superstars drive their values up and fresh new faces begin to build their own resume. Buying and selling sports cards is similar to the stock market, as a hot card today can be a cold card tomorrow. That said here are 10 NBA Sports Cards to Buy Now that could be a good sports card investment.

Before considering any purchase, remember with investing in anything, you take all the risk of what the end outcome could take place. Before we take a look at 10 NBA Sports Cards to Buy, remember when building a list of sports cards to buy whether it is baseball or basketball or football, or whichever sport you have decided to invest in, take the time to learn as much as possible. NBA cards are always some of the hottest cards each year with many cards landing on the Trending Up and Down report, here is the October Sports Card Trending Up/Down report.

Read on to learn more about a few NBA players sports cards you should buy right now. A few of these cards are some of the Hot NBA Sports Cards Right Now.

What makes an NBA sports cards worth buying and potentially have a growth in value?

Many different aspects have a direct impact on the value and potential value of that players sports cards. The same is said for players in the NBA as both individual and team performance plays a major. A player that is struggling, will see their value in some cases drop, while a player that is on a hot streak will see a bump in their value. Meanwhile teams that are struggling tend to see most of their players struggling.

Other things impacting the value of an NBA sports card include:

Now before we get to our 10 NBA sports cards to buy now, remember players such as LeBron James, Giannis Antetokounmpo, Luka Doncic are all expensive investments that are solid long term investments. The 10 NBA cards we are going to look at all have larger upside or shall we say are more like fantasy sleepers with potential to deliver great Return on Investment or ROI.

One player who may not get enough recognition around the NBA is the Cleveland Cavaliers shooting guard Donovan Mitchell. Mitchell who started his career with the Utah Jazz has built up a solid resume all by the age of 26 years old. Mitchell has made three straight NBA All-Star team, was on the NBA All-Rookie First Team, and has averaged at least 20 points per game in each of his first 5 NBA Seasons. Now joining a potential Eastern Conference contender, Mitchell should see his sports cards increase in value as he has gotten off to a hot start to the season. The Cavaliers guard is currently ranked 2nd in the NBA in scoring over his first three games averaging 33.3 points per game

Here are a few Donovan Mitchell sports cards to collect: 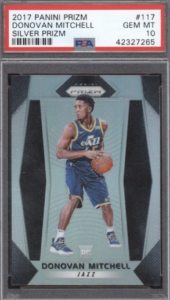 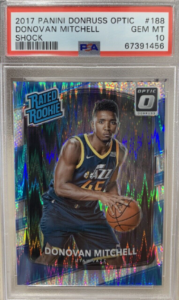 While already one of the young faces of the NBA, Cade Cunningham continues to develop into a proven NBA All-Star caliber player and one with a huge career potential. While Cunningham has shown strong promise, his high draft status and potential has driven up his market for his sports cards. Nonetheless, investing in Cade Cunningham rookie cards could see significant value increases over the next few seasons especially with the youth movement in Detroit. While you may be shocked when asking yourself “how much is a rookie Cade Cunningham worth”, a strong career could see his value continue to increase.

Here are a few Cade Cunningham sports cards to collect: 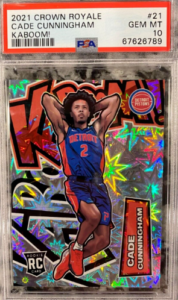 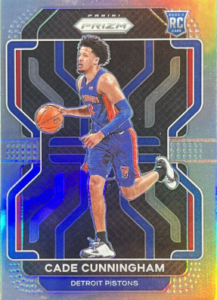 One player that has not had the luxury of playing on a contending team or even a large market team with a huge fan base is De’Aaron Fox of the Sacramento Kings. Fox who will be 25 in December, has been on some Kings teams that has struggled to produce. However, the former Kentucky Wildcats star has averaged at least 21.1 points per game in each of the previous three seasons. Currently to start the season Fox is averaging 31.7 points per game. His fast start makes it worth considering buying De’Aaron Fox rookie cards before the jump in value.

Here are a few De’Aaron Fox sports cards to collect: 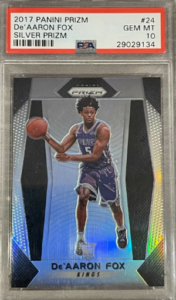 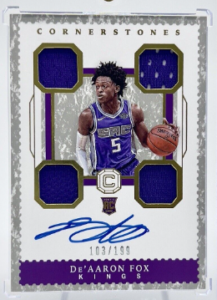 The Orlando Magic 2022 NBA Draft first round pick is already a hot commodity on the sports card market while Paolo Banchero rookie cards are some of the Hottest NBA Sports Cards on the Market right now. That said, if you have tracked the value some of the other’s top stars you can see their values have spiked year over year based on continue growth. While landing a Paolo Banchero rookie card in a pack of 2022-23 NBA basketball cards might be your best bet, you can elect to buy singles as well. A few of the newest NBA sports card releases have hit the 2022 October Sports Card New Release Calendar. 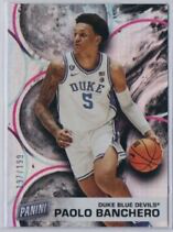 Start to learn the name Tyrese Haliburton of the Indiana Pacers as you start to look for NBA sports cards to invest in. The former 2020 NBA Draft first round pick is on an up-and-coming Indiana Pacers team filled with a ton of young talent. After landing on the NBA All-Rookie First Team, Haliburton is continuing to build his NBA resume with a hot start to the 2022-23 NBA Schedule. Haliburton who the Pacers acquired from the Sacramento Kings is averaging 24 points per game to start the season to go along with 4.3 rebounds, and nearly 10 assists per game (9.8).

Here are a few Tyrese Haliburton sports cards to collect: 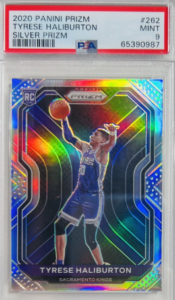 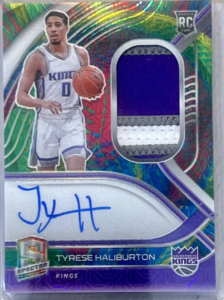 The 23-year-old San Antonio Spurs small forward is the start to a new wave of young stars with one of the NBA’s most prestigious teams since the mid 90’s. With Greg Popovich leading the charge, Keldon Johnson has a chance to turn into a proven stud in the NBA and one that can help turn the team’s recent struggles into success. Currently Johnson is averaging 20.5 points per game to go along with 6.3 rebounds, and 3.5 assists per game to start the NBA Season 2022-23.

Here are a few Keldon Johnson sports cards to collect: 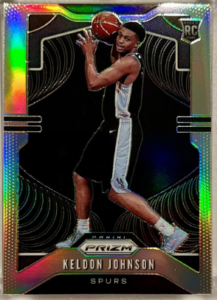 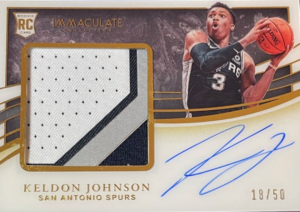 As the Portland Trailblazers have had the luxury of their All-Star point guard returning to there NBA lineup, they have also seen Anfernee Simons continue to take a step forward while showing his potential as an NBA shooting guard. Simons who is coming off a solid season during the 2021-22 NBA schedule finishing with 17.3 points per game has upped his production to nearly 20 points per game to start the season (19.8).

Here are a few Anfernee Simons sports cards to collect: 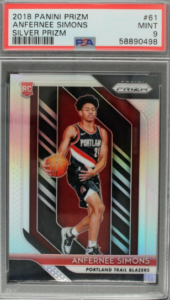 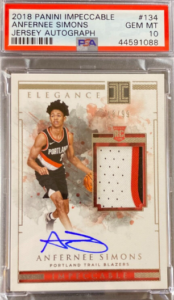 While his teammate Keldon Johnson also lands on the list of Top NBA Sport Cards to Buy, Devin Vassell is also a player to consider buying as well. The former Florida State Seminoles guard/forward has shown solid potential after posting 12.3 points per game last season. Through four games this season, Vassell is averaging 19.8 points per game to go along with five rebounds and 4.5 assists while playing a key role in the San Antonio Spurs offense.

Here are a few Devin Vassell sports cards to collect: 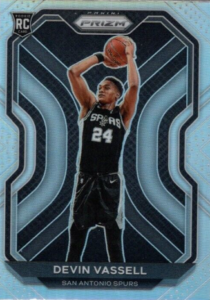 All eyes are on the Philadelphia 76ers during the 2022-23 NBA season while expectations are set for an NBA title. One of those players seeking national recognition is the former Kentucky Wildcats guard Tyrese Maxey who is just one key member of the talented 76ers roster. As teams focus on shutting down Joel Embiid and James Harden, Maxey should continue to showcase his playing ability around the NBA for the long haul this season and moving forward. Maxey is a player who has a potential to see his sports cards blow up in value over the course of the NBA season.

Here are a few Tyrese Maxey sports cards to collect: 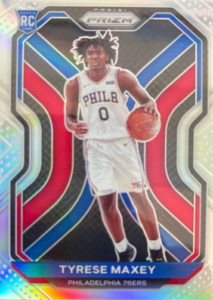 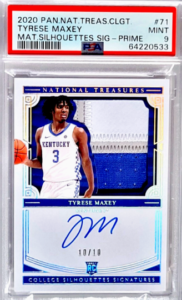 Last player on the list to consider investing is the Detroit Pistons 2022 NBA Draft pick Jaden Ivey. Ivey who played his college basketball with the Purdue Boilermakers, joins fellow top young star Cade Cunningham in a very young but dangerous Detroit Pistons lineup. Ivey has not disappointed to start the season averaging 17.7 points per game to go along with five rebounds and six assists per game. Look for his rookie cards in any of the 2022-23 NBA trading card releases set to come out produced by Panini.

Here is a few Jaden Ivey sports cards to collect: 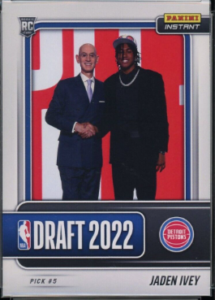 Stay tuned for more 2022-23 NBA Rookie cards of Jaden Ivey. Get your Jaden Ivey Instant Base on the Panini Website today.