The 2022-23 NHL schedule is starting to heat up on the ice as the NHL regular season is in full swing. As we have seen over the past few year’s sports cards continue to be a hot priority including hockey trading cards. As fans, sports cards collectors, and sports card investors shoot to find some of the next wave of the most expensive hockey cards, NHL Rookie cards are some of those cards that can shoot up in value. As you start to look at hockey cards to consider, we are here to deliver you a group of the Hot NHL Rookie Cards to Collect Right Now.

Before we take a look at the top NHL rookies, and some of the other NHL rookie cards to collect for the upcoming 2022-23 NHL schedule, let’s take a look back at one NHL star whose rookie cards continue to skyrocket in price. That NHL star is Connor McDavid of the Edmonton Oilers. McDavid who was drafted 1st overall during the 2015 NHL Draft, has taken home multiple awards since entering the league including the Calder Memorial Trophy for best rookie, the Hart Memorial Trophy as the NHL MVP, and Ted Lindsay Award for being the most outstanding player.

McDavid’s rookies are increasing in price, including one that lands on the Most Expensive NHL Cards of All-time list. With no further do, here is a look at some of the top NHL rookies from the 2022 NHL Draft, as well as the top NHL trading cards to find them in this season.

The 2022 NHL Draft was loaded with a ton of fire power including a stellar group of potential stars heading into their rookie seasons in the NHL. Headlining the group included the first overall pick Juraj Slatkovsky who was selected by the Montrael Canadiens. Following Slafkovsky included Simon Nemec, Logan Cooley, Shane Wright, and Cutter Gauthier who rounded out he top five NHL Draft picks during the 2022 NHL Draft.

How to decide which NHL Rookie cards to collect?

Honestly it all comes down to who is purchasing the NHL rookie cards and the budget you have set to purchase cards with. Many of the top tier NHL prospects top rookie cards will be expensive from the day the NHL products are released by Upper Deck. That said, when looking at rookies to collect with NHL cards from a sports card investing approach or from sports card flipping, consider looking at NHL stars on the offensive side of the ice.

Also do you research on lesser-known NHL rookies who could be considered a NHL sleeper and one that has the potential to see their value of their rookie cards explode with strong play across the rest of the NHL Season 2022.

Only one of the top trading card companies offers NHL cards and have elusive rights to producing NHL sports cards. That company is Upper Deck who has been front and center in the NHL Hockey Trading Card scene for many years now. Upper Deck who joined the sports card industry back I 1989 with the release of their 1989 Upper Deck Set, has been a leader within the industry since. Just a year later, Upper Deck released its first NHL product, 1990-91 Upper Deck Hockey.

No matter if you are looking to collect, invest, or flip NHL sports cards, these top tier NHL stars headline the list of the Hot NHL Rookie Cards to Collect Right Now list. Luckily for you many of the top Upper Deck NHL sports cards products have not been released yet leaving your chance to land a few of these rookies straight out of the pack while avoiding paying high prices on sites such as eBay and COMC.

Currently Upper Deck has one product for the 2022-23 product line on the market and a long list of new products set to release. Here is a look at the currently released NHL Trading cards and new releases set to hit the sports card industry.

The first NHL trading cards to hit the street for the 2022-23 NHL season is the 2022-23 Upper Deck MVP set. The product is available in a variety of options both in retail form and hobby form. Upper Deck 2022-23 MVP Hockey delivers a 200-card regular base set to go along with 50 high series star and rookie SP cards. This product delivers a solid collection of inserts, and parallels including the Ice Battle Parallel.

6 cards per pack, 15 packs per box (no odds guaranteed)

6 cards per pack, 36 packs per box (no odds guaranteed)

Now before we get to the top NHL Rookie Cards to Collect, for anyone that hasn’t collected hockey cards in the past or follow hockey, rookie classifications for the Calder Trophy (Rookie of the Year is similar to Major League Baseball Rookie of the Year specifications.

NHL players are considered rookies if they have played in 25 fewer regular season games. That said, if you are looking to flip sports cards for a profit, collect sports cards, or even invest in sports cards, you will have options among NHL rookie cards.

It will be some time before you start to see the 2022-23 NHL Draft Picks start to land in upcoming trading cards. However, there are cards available for these top young hockey players while future releases from Upper Deck will start to focus on adding them to products. Here are a few of the Top NHL Rookie Cards to Collect. 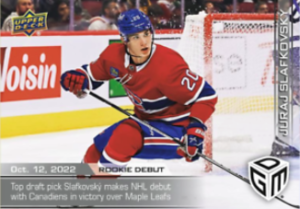 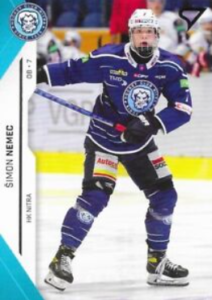 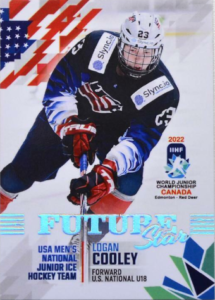 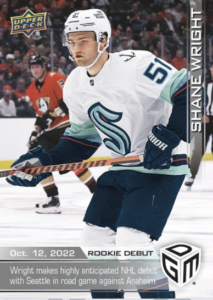 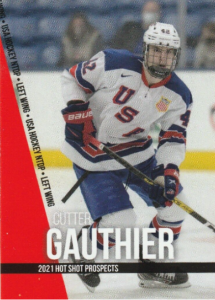 After being selected in previous NHL Drafts, top tier Calder Trophy candidates have slowly arrived on the scene and will be featured in new NHL card releases from Upper Deck. Here are a few of the top NHL rookie cards to collect from players who are eligible for the Calder Trophy. A list that includes Owen Power and Mason McTavish. 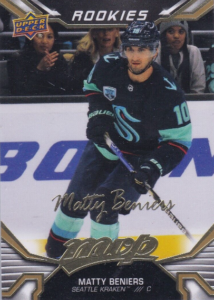 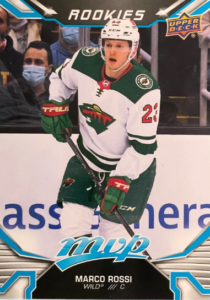 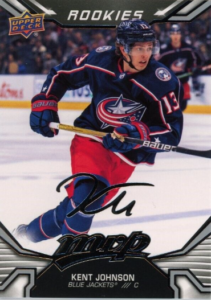