BGS VS CSG Grading Guide: Who to choose?

Sports card grading is a process where the owner of a sports card submits the card to a third-party grading company such as BGS or CSG. The owner of the card pays a submission fee for the card to be examined, encapsulated within a slab, and a specific number grade assigned to the card. The card is then returned to the owner.

During this process the sports card or cards submitted for grading, will receive a grade between 1 and 10. In addition, other grades can also be obtained including sub grades that BGS provide and grades for the quality of the autograph. Once received, the owner can add the card to their personal collection (PC) or elect to sell the card on the various sports card marketplaces such as Check Out My Cards and eBay.

In addition to BGS, CSG, PSA, and SCG, other new companies are also present and available for sports card investors and collectors. One suggestion before selecting a third-party sports card grading company is to take the time to research the company and what other collector’s successes, they have had with them.

While you continue to learn about who grades sports cards and which sports card grading companies are the best, many other questions are asked about grading. One popular question that is asked is it worth getting sports cards graded? To answer that question, it honestly depends on what you are looking to do with the card and whether you can make money selling sports cards.

In most cases depending on the card, the quality of the card, and the grading company used, it is worth getting sports cards graded. However, in some cases it is not, and that is where understanding how sports card grading works and the costs involved are key. Prior to any submissions, take the time to research the cards you are interested in having graded and see how they are performing on the secondary market.

If you are planning on just building a collection or a set of high graded cards, it isn’t that important. On the flip side if you are a sports card flipper and are looking to make a profit, you must know how much a card will sell for graded by a company, how much a graded 9 sells for compared to a graded 10, and the fees involved.

Worth getting sports card graded example:

For example, say you have a rookie card of a player that is having a great year and you head to eBay or COMC to see how much the card is selling for. You notice an ungraded version is selling for $30 dollars whereas as a BGS 9 is selling for $150 or a CSG 10 is selling for $250. While you may not receive one of those grades, it is clearly worth getting graded if the card is in good shape.

Now you decide to have the card graded, the card which you believe will grade high is a 9.5 when returned. You sell it for $225 and your fees were only $30, you ended up making $195 compared to the $30 you could have sold it for ungraded.

We are here to look at two of the top sports card grading companies. Those two companies are BGS or Beckett Grading Services and CSG or Certified Sports Guaranty. BGS arrived on the sports carding scene in 1999 and has continued to deliver exceptional service and grading that meets or exceeds most of the other grading card companies. In addition to grading, Beckett also offers an online sports value book, storage option for collectors, and autograph authenticity.

BGS VS CSG Grading Guide: Should you choose BGS or CSG for Sports Card Grading?

As you have come to learn about deciding on which sports card grading company to choose can be difficult. As you come to learn when comparing BGS VS CSG or PSA VS SGC or BGS VS PSA they all offer a good if not great service to the hobby. That said, a variety of different elements should be considered before making your decision on which company to use.

These elements that you should research including the type of sports card grading scale they use, the cost of sports card grading with those companies, the turnaround time to receive your card back, and the overall appearance of the final graded product. Lastly and possible the most important element to consider is comparing the comp sale prices between the two companies to see which one outperforms the other.

Here is a look at how BGS and CSG stack up against each other when comparing the various elements of sports card grading.

Here is a look at BGS VS CSG grading scale.

BGS uses the standard 1-10 sports card grading scale with them focusing on their half point designation for 9. Furthermore, BGS also options to have subgrades added to the graded card for a higher fee or a single overall grade for a lower fee. The subgrades are graded on a half point designation while also helping determine if a card is a True Gem 9.5 or a Gem Mint 9.5.

A second element of sports card grading that is key to understand and know is the grading fees associated with both grading companies. You may ask yourself how much does it cost to have sports cards graded? Knowing how much it cost, could help you determine which company to use, especially if you are looking to sell the card. Here is a look at BGS grading card fees and CSG grading card fees:

As the demand fluctuates for sports card grading, the time frame to have your graded cards graded and return may vary. This is something all sports card collectors who are looking to have cards graded should know especially anyone looking to immediately sell the card. Always refer to the BGS website and CSG website for up-to-date time frames. Here is a look at the current turnaround times for BSG and CSG. 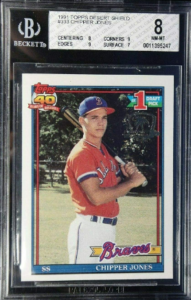 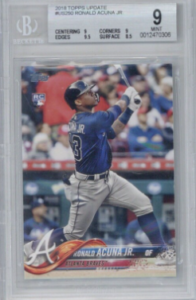 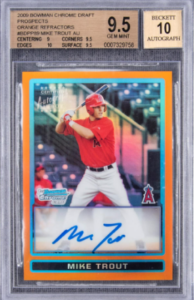 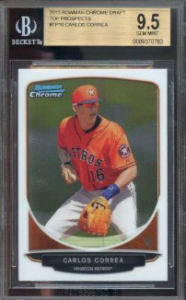 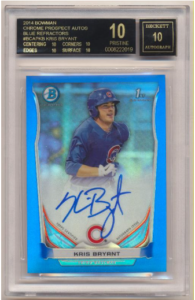 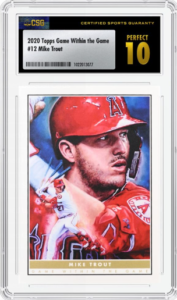 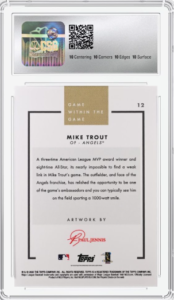 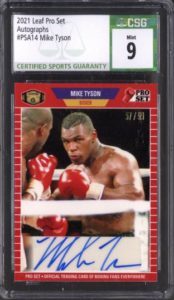 While other elements are important in the battle between CSG VS BGS, possible the most important depending on whether you are a collector or investor is eBay Sale comps. For example if you are looking to flip a sports card for a profit, you will want to go with the grading card company that has the higher resale value. For example if you are grading a Tom Brady Rookie Card, if BGS 9’s are selling for $1,000 and CSG 9’s are selling for $500 it would be a strong deciding factor. 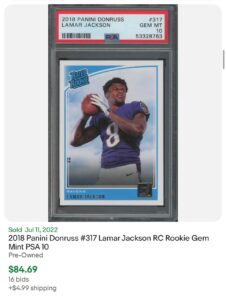 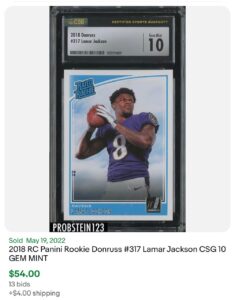 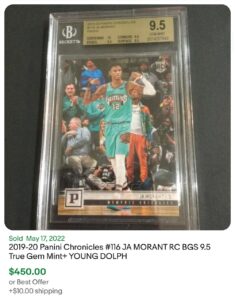 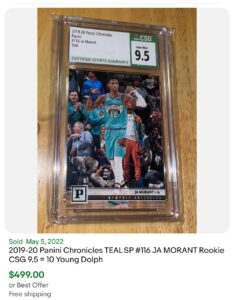 BGS VS CSG Grading Guide: Our Thoughts on BGS VS CSG

As you look at both BGS and CSG, you come to see why both third-party grading companies rank near the top within the industry. They both offer great service to their customer, both deliver premium encapsulated slabs, and both add value to the owner or seller. In the end, it simply comes down to you the collector and what you are looking for out of the graded submission.

If you are looking to build a PC of graded cards that are protected, both may meet your needs. However, if you are looking for an increase in resale value or potential future investment opportunities, BGS stands out based on the current track record of comp sales between similar cards on eBay.

Take the time to do your math based on these comp sales and fees to have card graded, while seeing which option is best for you. With that said, it is nearly impossible to determine what the sports grading landscape will be in the future. For now, though BGS and CSG both look to be at the front of the pack.