As sports card collectors and investors look to find ways to increase the value of their sports cards, the sports card grading market demand increased. This demand has continued to be an issue for the top sports card grading companies such as Beckett Grading Services (BGS), Professional Sports Authenticator (PSA), and Sportscard Guaranty Corporation (SGC) leading to delays, long turnaround times, and higher grading card fees.

While time can only tell whether CSG will be around sports card grading for the long haul or whether they will disappear. For now, we can only sit back, analyze CSG grading company, compare the CSG VS BGS, CSG VS PSA and CSG VS PSA. Now while the company is new, we will take a deeper look at CSG, how they have performed to this point, and how their comp sales on eBay stack up against the other sports card grading company competitors.

Read on to learn more about CSG sports card grading, can CSG stack up against BGS or PSA, CSG grading fees, more about their company, CSG grading turnaround times, and what CSG graded cards look like.

Who is CSG sports card grading?

Certified Sports Guaranty is a sports card grading company that launched back in February 2021. CSG is just one of many other grading companies offered by Certified Collectibles Group (CCG).

CSG offers sports card grading as well as determining whether the card is authentic, altered while also providing numerical grades to both the condition of the card as well as any autographs on the card.

The debate over whether CSG grading is good will go on for years to come as many within the sports card hobby still debate who wins between BGS VS PSA or PSA VS SGC or BGS VS SGC. Now a new debate can be made and that is whether CSG is good and if they can stack up against their sports card grading company competitors.

When you look at CSG sports card grading scale, the company offers a standard 1-10 scale with half point increments start at 1.5 and go to 9.5. Some of the other competitors, only hand out .5 in certain circumstances such as a BGS 9.5.

How much does it cost to have sports cards graded by CSG?

With any sports card grading there is a fee associated with it to include the cost to have the card graded, encapsulated, and shipped back to you the collector. Here is a look at CSG grading fees:

Look and feel of graded sports cards are also one thing important to sports card collectors, here is a look at CSG graded slabs:

As more and more cards are graded by CSG and sold by sports card marketplaces such as eBay or Check Out My Cards (COMC), the better we can compare comp sales. Here is a comparison of a few comp sales on eBay between CSG, PSA, and BGS. 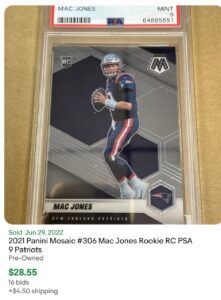 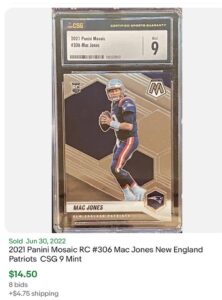 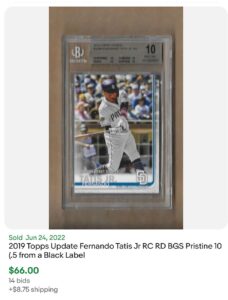 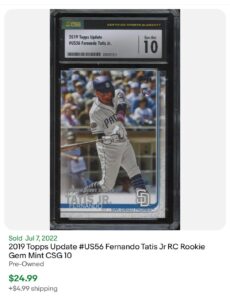 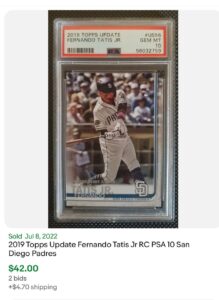 As you can see in a side by side comparison, similar comps to BGS and PSA are lower. For example comparing the 2021 Panini Mosaic Mac Jones Rookie Card, the PSA 9 sold for $14 more. Whereas the 2019 Topps Update Fernando Tatis card version BGS 10 sold for approximately $41 more and the PSA 10 sold for $17 more.

If you are looking to how to find undervalued raw ungraded sports cards, have them graded and then flip them for a profit, you will need to determine which option allows you to make the most profits. Just because the card from CSG is selling less doesn’t mean it might not net you a higher profit. 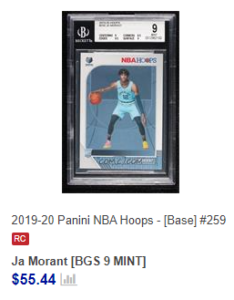 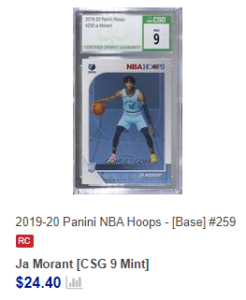 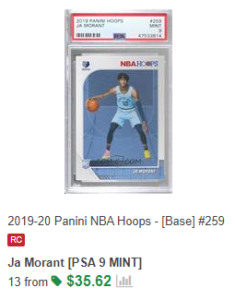 While eBay Comps are showing actual sales, here is look at COMC Comp asking prices for the 2019-20 Hoops JA Morant Rookie Card graded 9 from BGS, CSG and PSA. As you can see, the asking price for the BGS is the highest and nearly $31 more than the CSG. Whereas the PSA 9 is only $11 more than the CSG 9.

When comparing comps, and deciding whether CSG is worth using for your sports card grading you must compare grading card fees and previous comp sales to the card you want to grade and list.

Can CSG compete against BGS and PSA?

Since CSG has only been around for one year plus a few months compared to two of the industries top companies who have been around for 10 plus years it is hard to say if they can compete. For now, though, CSG offers a solid product and great service for the price while also offering a nice looking encapsulated graded card when completed.

Over time, comp sales and how CSG grades cards compared to their competitors will determine if they can compete. If they are strict on their grading tiers, stay more consistent, and companies continue to compare them/review them and even have their cards removed from CSG cases and compared to the other companies. CSG can be a game changer and the big competitor to companies such as BGS, PSA, and SGC.

Since we have only encountered a hand full of cards graded by CSG sports card grading, it is difficult to say exactly how good CSG is and what we think of them. However, the company has been solid within an industry that has seen many other sports card grading companies fail. The overall look and feel of the CSG graded cards are comparable to that of other companies.