That quarterback is the San Francisco 49ers Brock Purdy who recently took over for the injured Jimmy Garoppolo. Since taking over as the starter Brock Purdy sports cards have exploded leaving the question on what to do with Brock Purdy Sports Cards? Should you buy, sell, or hold?

To answer that question, it is a little more difficult than just saying yes or no. While high first round NFL draft picks at the quarterback typically see their cards demand high price tags. Quarterbacks taken farther down the draft or in the case of Mr. Irrelevant Brock Purdy don’t typically see their price tags explode till they produce on the field. This is exactly what we have seen with the 49er’s rookie quarterback.

Before we look at what you should do with your Brock Purdy Sports Cards, let’s take a look at who Brock Purdy is. In addition to who he is we will look at how we got to this point with Brock Purdy starting. Feel free to read our November Hottest Sports Card Right Now article and our December Hottest NFL Cards to buy right now for a few other hot cards to collect right now.

Brock Purdy Sports Cards – Should you Buy, Sell, or Hold?

Who is Brock Purdy?

The big question around the National Football League is who is Brock Purdy? Yes, by now we all know Brock Purdy is the starting quarterback of the San Francisco 49ers. But where did he come from? Brock Purdy is a soon to be 23-year-old (December 27th birthday) who was born in Queen Creek, Arizona and would eventually play his high school football at Perry High School. Purdy would lead to the school to back-to-back 6A Division AiA State Championship games losing in both.

His performance on the field landed Purdy as the Gatorades Football Player of the Year as well as Arizona’s High School Football Player of the Year. Despite his success on the field Purdy was only slotted as a three-star recruit before committing to play college football at Iowa State. In four years with the Iowa State Cyclones, Purdy would throw for 12,170 total yards to go along with 81 touchdowns to just 33 interceptions putting together an impressive college resume.

The success on the field opened up the door for the San Francisco 49ers to draft Brock Purdy with the 262nd pick of the 2022 NFL draft as well delivering the title of 2022 NFL Draft Mr. Irrelevant.

Who is called Mr. Irrelevant in the NFL?

Now before we move on to answer this question, Mr. Irrelevant is a title delivered to the last NFL draft pick drafted during the NFL Draft. Over the years many players have been selected with the last pick including possible most noted player kicker Ryan Succop but not many have succeeded in the NFL. Here is a list of all the Mr. Irrelevants in NFL history.

How did Mr. Irrelevant become the starting quarterback for the San Francisco 49ers?

Fast forward as the 2022 NFL schedule rolls into Week 16 and the question of how Mr. Irrelevant 2022 became the San Francisco 49ers is a hot topic. In short, the 49ers drafted Purdy more of a depth draft pick while having an additional quarterback in the waiting had they decide to move on from Jimmy G. However, injuries to both Trey Lance and Jimmy Garoppolo thrusted Purdy into the spotlight while taking over as the San Francisco 49ers starting quarterback.

While Purdy had one previous drive earlier in the season in replacing Garoppolo late in a blowout loss to the Kansas City Chiefs it wasn’t till December 4th he was inserted as the injury replacement for what may be the rest of the season. Purdy would go on to finish that game on December 4th, 2022, against the Miami Dolphins throwing for 210 yards with two touchdowns and one interceptions while leading the team to a key win.

Over his first two starts both wins against the Seattle Seahawks and the Tampa Bay Buccaneers, Purdy threw for 402 yards to go along with four touchdowns and zero interceptions.

Should you Buy, Sell, or Hold Brock Purdy Sports Cards

Now that everyone knows who Brock Purdy is and where he came from, let’s look at the question asked. Should you buy, sell, or hold Brock Purdy Sports Cards? Now before we look at each of those options, remember buying and selling sports cards is not a guarantee you will make money if you are looking at sports card investing as an option to make money. However, there are opportunities you can buy, sell, and flip sports cards for a profit.

Depending on whether you are a sports card collector, a Personal Collector or PC San Francisco 49ers sport card collector or someone looking to make money with sports or as a possible sports card investing opportunity, the answer will be different. Here is a look at each of the three options you should consider with Brock Purdy sports cards.

This is a tricky situation for any sports card collector or sports card investor as just a few short weeks ago the limited quantity of Brock Purdy rookie cards were going for a fraction of what they are today. However, as we have seen with other top tier quarterbacks around the NFL, these quarterback rookie cards are expensive. So, buying a few Brock Purdy sports cards may cost you a lot more today, it may benefit you over the long haul. Be cautious with whatever decision you decide as there may be a quarterback controversy in San Francisco to begin next season.

A second option is if you have been lucky to land a few Brock Purdy rookie cards or elected to invest in Brock Purdy when he was just the San Francisco 49ers third string quarterback is to sell. Now this may be a simple question to answer as right now is a great opportunity to make a profit selling sports cards or in this case selling his rookie card. However, search some of the other top NFL quarterback rookie cards of players such as Josh Allen, Lamar Jackson, Justin Herbert, Joe Burrow, and Patrick Mahomes before deciding.

While it is hard to say how good Purdy will be but if he struggles his value could take a huge tumble, a strong finish, and a starting job for years to come could send his cards north in value. 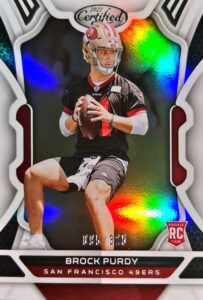 Get your Brock Purdy 2022 Panini Certified Rookie Cards on eBay. 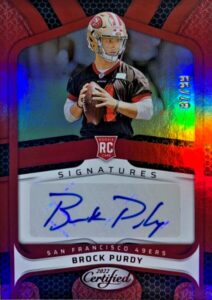 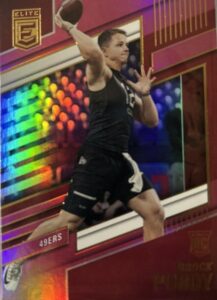 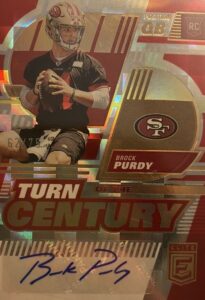 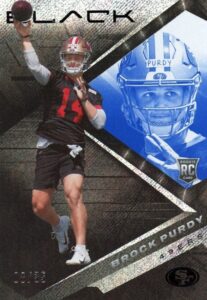 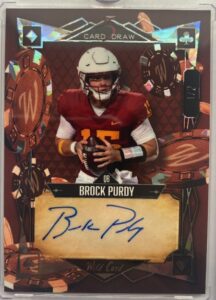