The 2022 NFL schedule continues to heat up as the hunt for the NFL Playoffs starts to build for teams around the NFL. As the action is hot on the field, the NFL sports card action is red hot as well sports cards collectors look to land some of the Hot NFL cards on the market. From proven NFL stars continue to put together impressive performances to the 2022 NFL Draft Class slowly starting to build their NFL resumes, the list of the Hot NFL Cards To Buy Right Now December 2022 is loaded with options.

With no further due, here are some of the Hot NFL Cards to Buy Right Now December 2022

Now before we take a look at the Hot NFL Cards to Buy Right Now December 2022, here are a few factors impacting whether a sports card is hot or not.

Possibly the biggest impact on any sports card value is the performance of that player within the NFL during the current season. In theory the better the player is performing, the more expensive the sports card value is and how hot the sports card is. For example, Patrick Mahomes continues to put-up big-time NFL statistics week in and week out, while some of the Patrick Mahomes rookie cards are the most expensive within the hobby.

A second major factor that could be impacting whether an NFL card is hot or not is any recent news or team news that might be related to them. Like the stock market sports cards values are impacted in a positive way when good news becomes available on a player or team. Meanwhile negative news regarding a player or team will see sports cards value fall in price. For example, if a player is involved in an incident off the field or if a team has negative news released.

A third major factor impacting whether a sports card or NFL trading card is hot is whether a player recently got injured or potentially returning from the injury list. For example, Lamar Jackson who recently suffered a knee injury has missed at least one Baltimore Ravens game. This type of injury can lower his trading card value while someone such as rookie wide receiver Jameson Williams returned to the field for the first time for the Detroit Lions.

Now that you have had a chance to read about factors impacting the status of NFL cards, the time to see the Hot NFL Sports Cards to Buy Right Now is here.

Nearly any month of the year you will see Patrick Mahomes at the top of the hottest NFL cards to collect list. That said Mahomes is on pace to take home yet again another NFL MVP award which could help increase his cards value down the stretch. Add that with the fact the Kansas City Chiefs are in contention for another trip to the NFL playoffs makes him a great sports card to collect.  Here are a few of the Hot Patrick Mahomes football cards right now: 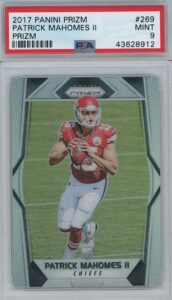 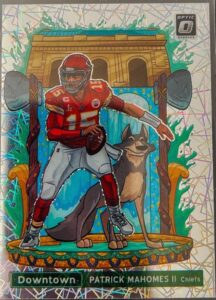 Depending on what you are looking for, one of the Hot NFL Cards right now are that of the Las Vegas Raiders running back Josh Jacobs. While running backs don’t typically see the value that the quarterback cards can demand, Jacobs is still having a great season while leading the NFL in rushing yards through the first 14 weeks of the 2022 NFL Season. Here are a few of the Hot Josh Jacob football cards right now: 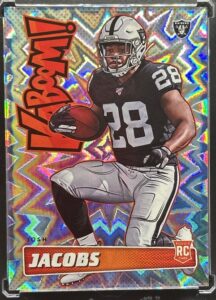 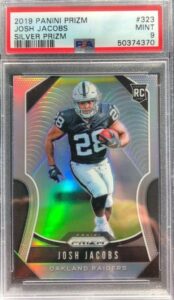 Landing on the list of the Hottest NFL Sports Cards to collect right now list is the Minnesota Vikings wide receiver Justin Jefferson. Jefferson who has been a freak at the wide receiver position since arriving in Minnesota as a rookie. Currently Jefferson ranks 1st in the NFL in receiving yards through the first 14 Weeks of the 2022 NFL schedule. If Jefferson can stay at this pace, he has a chance to surpass the NFL receiving yards record held by Calvin Johnson. A record-breaking performance could drive Justin Jefferson cards up in value. Here are a few of the Hot Justin Jefferson football cards right now. 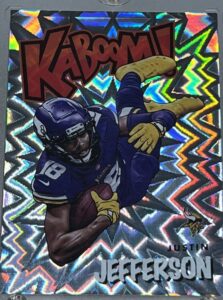 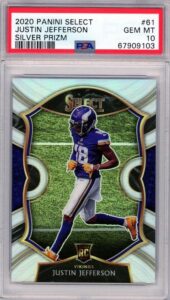 Another wide receiver who continues to put together a great year while driving his football card status to one of the Hot NFL Cards right now is the Cheetah Tyreek Hill. While some experts questioned his potential with the Miami Dolphins prior to the season, Hill has silenced those experts as he currently trails only Justin Jefferson for the most receiving yards in the NFL while helping the Dolphins sit near the top of the AFC during the 2022 NFL season. Here are a few Hot Tyreek Hill football cards right now: 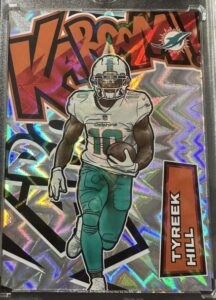 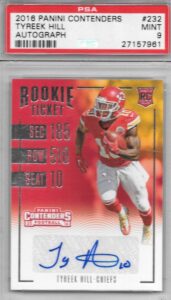 Joining Patrick Mahomes on the list of the Hot NFL Cards Right Now List December 2022 is the Philadelphia Eagles quarterback Jalen Hurts. Hurts who is a potential NFL MVP candidate is putting together his best season of his young NFL career while dominating both with his arm as well as his play making abilities with his feet. A deep run into the 2022 NFL playoffs could help accelerate his NFL trading card value. Here are a few of the Hot Jalen Hurts football cards right now: 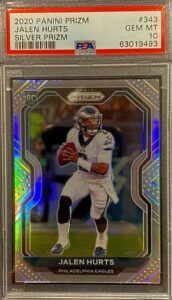 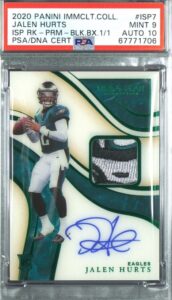 As we have stated prior running backs around the National Football League get no love when it comes to their football trading cards. Nonetheless, it is hard not to take a look at the Houston Texans running back rookie cards after his strong rookie season. Through the first 14 weeks of the 2022 NFL season Pierce leads all rookie running backs while sitting just 61 yards from his first 1,000-yard rushing season. Look to fill those Christmas Stockings with this young NFL running back. Here are a few of the hot Dameon Pierce football cards right now: 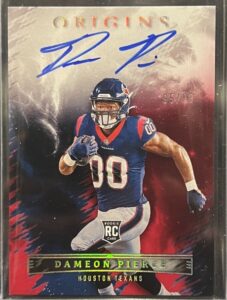 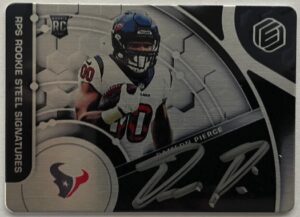 Yes, you read that correct the former Los Angeles Rams quarterback Jared Goff is hot right now while having the Detroit Lions playing good football. Goff who has struggled over the past few years is currently ranked 8th in the NFL in passing yards with 3,358 while also ranking tied for 5th with 22 touchdown passes. While he sits behind a few of the other top tier quarterbacks in the league this season, Goff has played well to make his cards worth considering while also being some of the Hot NFL Cards Right Now. Here are a few of the hot Jared Goff football cards right now: 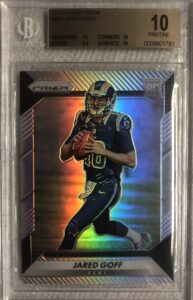 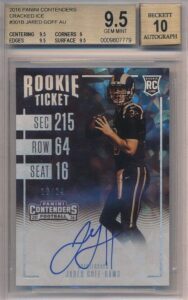 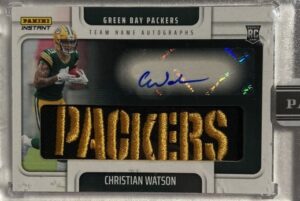 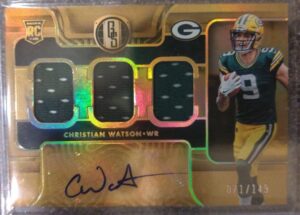