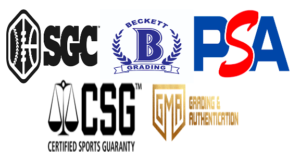 To answer the question what Sports Grading is; the simple answer to make it easy is a value asserted to a card submitted to a third-party grading service based on the characteristics of the card (corners, surface, centering and edges) In this Sports Card Grading Guide, we will discuss in detail sports card grading, look at the top third-party sports card grading companies and some other tips and information. 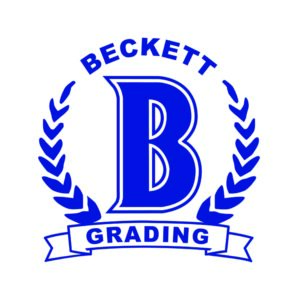 In addition, Beckett also offers Raw Card reviews on-site at various card shot events in which they grade the card in hard sleeve based on what they believe it would deserve, then you would submit for full-service encapsulation.

Another one of the Top Sports Card Grading Companies in the hobby, Professional Sports Authenticator (PSA) is a leader in the sports card grading landscape and have been around since 1991 while also offering sports card autograph authentication. Along with offering top tier grading that brings some of the highest values to sports card sales, PSA offers an extensive population report for all cards graded while allowing sports card collectors an opportunity to see how many cards of a specific player had been submitted and graded.

A third company that is among the Top Sports Card Grading Companies in the hobby, Sportscard Guaranty Company (SGC) is among one of the most recognized sports card grading services in the industry and a leader in sports card vintage grading has been around since 1998. As SGC is a leader, collectors typically lean to SGC for vintage card grading which tend to bring more value then both PSA or Beckett.

Fourth company among the Top Sports Card Grading Companies in the hobby, Certified Sports Guaranty (CSG) ranks as one of the best in the industry. CSG continues to become more popular among the sports card hobby while ranking fourth among the big five in amount of submissions on a monthly basis. One of the newer third-party grading companies, CSG continues to grow while making revamped upgrades to the label to impress collectors.

Last of the recognized and Top Sports Card Grading Companies in the hobby, GMA Grading is lesser known or at the quality level of the other three (BGS, PSA or SGC). Despite being lower tier, GMA offers solid sports card grading service at a lower-price and faster turnaround since the sports card grading boom in 2021.

Characteristics of sports card grading consists of the corners, centering, surfaces, edges as well as quality of autograph (if card is autographed). For the most part the four key characteristics directly impact how the third-party grading services will grade the card in terms of their sports card grading scale. On cards graded by Beckett Grading Services, a physical grade will be displayed on the encapsulated case for each of the following Corners, Centering, Surfaces and Edges, as well as an overall grade of the card (and autograph if the card has an autograph).

Meanwhile, PSA and SGC, do not display individual grades for characteristic on the card but value it into their overall grade.

When it comes to “Corners” it is talking about the four corners on most cards as well as additional corners on Die-Cut cards. A perfectly sharp corner is required to land a perfect score or a Gem MT rating. Sports card grading services use high-definition magnification tools to examine each corner from both the front and back of the card. Any ding, imperfection or what looks to not be a perfect sharp corner will see a reduction in grading. Rounded corners and bent corners will result in either fair or poor sports card grades.

One sports card grading characteristic that gets overlooked is the actual surface of the card. However, this is a key component that is inspected by any of the top grading companies. Issues on surfaces that can impact grades could include debris or dirt that is in the card during printing, fingerprints (chrome, metallic and refractor cards mostly), as well as any scratches or flaws that might be present.

Edges of the card are the outside border of the sports card that connects to each corner. Much like the corners, edges are examined for potential dings, chips or separation within the cardboard that is applied together.

BGS uses a grading scale of 1-10 with ½ point increments (8.5, 9.5, etc.), with BGS 9.5 landing a Gem Mint rating and a BGS 10 receiving a Pristine rating, or what is now referred to as a BGS Black rating which is assigned to modern cards only with graded scores of 10 on all four sub grades (characteristics). Beckett also uses other labels to go along with the black label, such as a gold label for cards 9.5 or 10 (Vintage), as well as silver labels for graded cards ranging from an 8.5 to 9 and a white label for cards grading below an 8.5.

OF – Out of Focus

*BGS Turnaround times updated as of May 18th, 2022 to allow for economy submissions.

Each company has their own submission policy and standards. Review the following submission websites for each of the four companies:

Artificial Intelligence (AI) Sports Card Grading: What is it?

A new aspect to sports card grading is through new Artificial Intelligence (A) sports card grading. If you are asking yourself what is AI grading, it is a grading service that is offered through new technology that can use artificial intelligence to determine the actual grade of the card once submitted through a scanning device or smart phone app. The AI grading will then scan and analyze the card and return a graded score. Some AI grading companies will also provide you with a printable label to attach to your hard sleeve.

One company that will be hitting the market that is available for AI-grading is Break Stuff which will have a smart phone app and a future potential to create a NFT the card graded.

What Sports Card Third-Party Grading Service to use?

A big debate among the sports card hobby is which of the top sports card grading companies is the best to use. The debate can compare BGS VS PSA or PSA VS SGC or BGS VS PSA VS SGC. In addition new debates over BGS VS CSG or PSA VS CSG can be argued.

Price can be a big factor in the decision to use a specific company while actual selling price of cards graded by that specific company is the priority deciding factor. For example, let’s take a look at a Luka Doncic 2018-19 Panini Prizm Base Card #280 to help you understand the difference in selling price.

As a result based on these numbers, it is easy to see that for higher resale value, investing in BGS graded card bring higher values but cost more money. One tip to help you decide on what cards to submit is to pre grade a few of your submissions for each company.

However CSG is showing strong sales potential. CSG and SGC may both be solid sports card investments on the secondary market with potential for growth. Checkout out our grading guides comparing BGS VS CSG, PSA VS SGC, BGS VS PSA, and BGS VS SGC for more information on sports card grading.

Once returned then evaluate the results and compare actual grades to your pre rankings. If your grades are similar, this should help you decide which cards to have graded and which cards not to. With the cost of grading at a premium, find ways to reduce costs and risks of getting lower grades.

When it comes to sports card grading tools/items nothing is necessary needed outside of your smart phone and sports card supplies. Sports card supplies include items such as penny sleeves or soft card savers, top loaders, bubble wrap, painters’ tape and bubble mailer or card box. Need help with various sports card terminology, check out our Sports Cards Glossary and Terminology article.

Smartphone – most smartphones have a magnifier including the iPhone magnifier, use this to examine corners, surfaces, and edges. In addition, smart phones have lights to help you examine the card in lower lighting situations.

Microfiber Cloth – used to clean surfaces of the cards (use carefully).